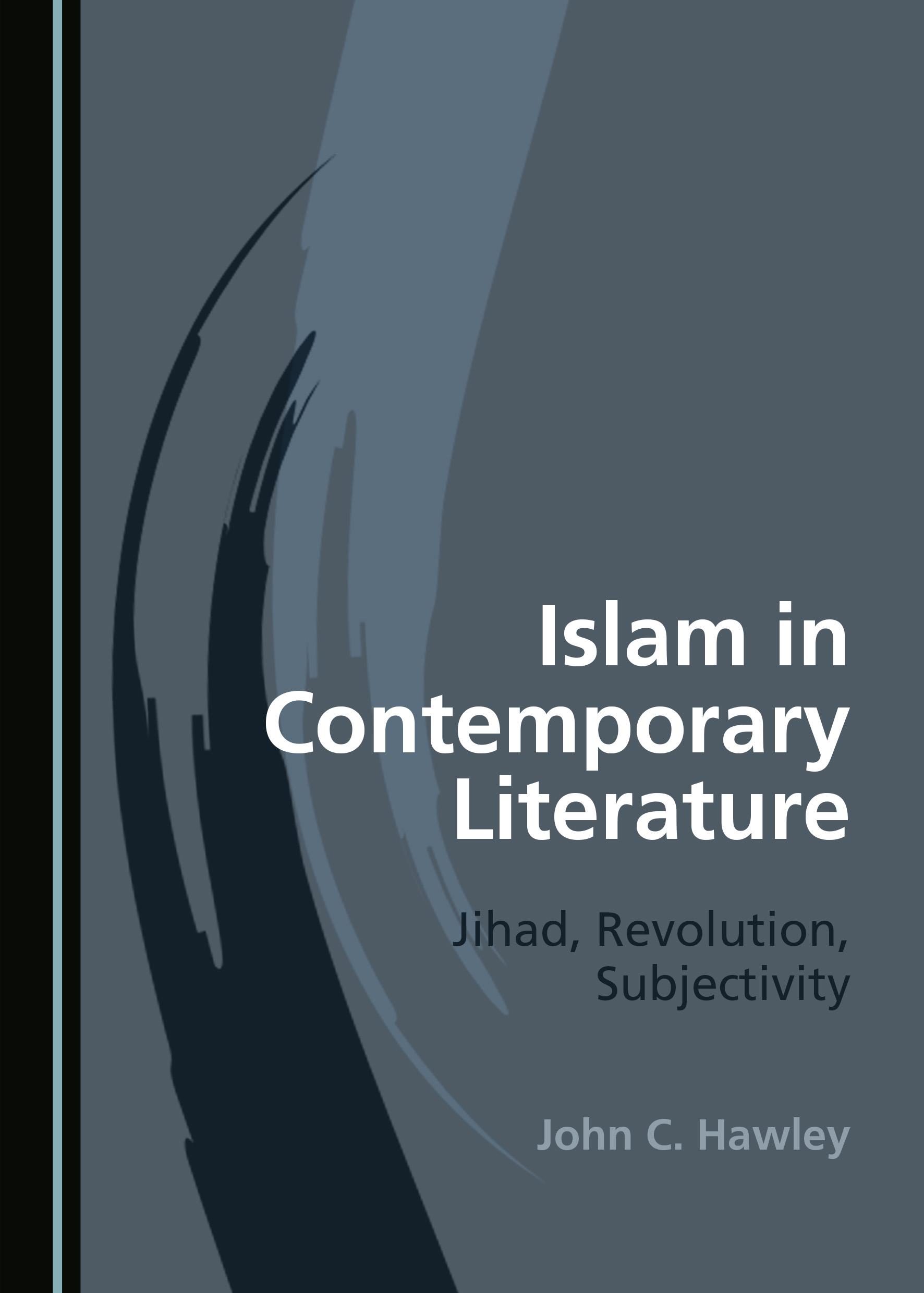 I began writing Islam in Contemporary Literature in 1997, little knowing that the World Trade Center event was looming, but suspecting that Islam would soon be moving to center stage for the West. The West, arguably, had willy-nilly been forcing itself into that central placement in the consciousness of the Islamic world for centuries, colonizing their consciousness as stridently as it had their territories. It was this ‘we/they’ polarity that fascinated me, but, in the course of the writing, this binary faded from focus as the conflicts within Islam itself stepped forward and revealed not only the complexity of the religion’s historical manifestations, but also the inescapable emotional traumas that were rooted in the originary family quarrels of the first generations and that flourished as the religion spread into widely disparate ethnic and ‘national’ regions. Though it never had a ‘Protestant’ reformation and ‘Catholic’ counterreformation, Islam struggled with interpretation of its texts, its implied mandates, and its licensing of ‘authentic’ voices and ways of being in the world. A comparatively simple theology somehow managed to become mired in fundamental rigidities and consequent internal intolerance, resulting in an introversion that shuttered it away from playing a larger role in the world that moved along on its own, increasingly oblivious, course.

My book aims to discuss the controversies within the various contemporary Islamic communities—revolution as it expresses itself in a religious awakening that generally manifests itself politically; the various incarnations of jihad, envisioned by many as the restoration of a disrupted destiny; the struggle to define individual rights within a sometimes intimidating social structure that relies on premises not fully aligned with those of Europe and elsewhere in the West; various forms of fundamentalism; the attempt to define a modernity distinct from the individualism of America; the changing role and visibility of women in society, and the reconceptualization of feminism; the search for an authentic interpretation of core texts and the concurrent search for authentic speakers for Islam in the larger world; the task of maintaining rootedness while coping with hybridization; and the plurality existent for centuries within the  that may be obvious to increasing numbers already: that there is no single so-called ‘Islamic’ response to almost anything.

The corollary, of course, is that no public act should be used by critics of the religion to brand it or its adherents in toto. Others have noted the parallel with Christianity here—the Oklahoma terrorist truck bombing of the Alfred P. Murrah Federal Building in Oklahoma City, Oklahoma, on Wednesday, April 19, 1995, was perpetrated by Timothy McVeigh and Terry Nichols. Most Americans did not blame Christianity for the 168 killed and 680 injured in that blast, and were perfectly capable of distinguishing these ‘bad apples’ from the religion itself. That was more difficult for some when it came to the attack on the World Trade Center, partially because many Westerners, quite ignorant of Islam’s history and tenets, blithely identified the entire religion with the perpetrators of that horror.

An example of the varieties of jihad discussed here would be Edward Said’s lifelong position as perhaps the most prominent spokesperson for the Palestinian cause in the West. Famous for his groundbreaking work on the portrayal of colonial peoples by their nineteenth and twentieth century masters, Said was clearly haunted all his life by the curse and the blessing of his own hybridized identity as a Palestinian living abroad and mingling with a world that would have been happy to reward him for quietly ignoring the discomfiting facts of his origins. Self-perception, which permeates his writing on the Palestinians, obviously energizes his broader ethnic concerns because it first presents itself as a personal question: am I, he seems to ask, the person that the Western world (or the Middle East, for that matter) seems to think that I am? By extension, are the Palestinian people as comprehensively understood by their enemies and sometime friends as they might be? Similar questions arise throughout the Islamic world for young men portrayed in novels like Mohsin Hamid’s Reluctant Fundamentalist, men who are not uncouth wide-eyed radicals but graduates of prestigious Western universities who know American and European societies well—in fact, from their point of view, they know these societies too well—and have grown to loathe them and to see them as Goliath (if not Delilah): strong corrupting temptations for any young man. They never feel completely accepted in their adopted culture—praised for their hard work and for their success as capitalists, but only so long as they increasingly assimilate and become less foreign—and each is caught short by some historical event that brings “home” to them their comparative isolation in a Judeo-Christian milieu.

Religious and political awakening reveals itself in novels as disparate as Leila Aboulela’s Minaret and Yasmine el Rashidi’s Chronicle of a Last Summer. Leila Aboulela stands out as a devoutly religious Muslim who has found a large audience for her novels in the West, and she is concerned that Middle East experts in the West don’t embrace Islam. In Minaret, Aboulela’s focus is less on conversion of the other, and more on a recommitment of oneself to belief while living in a country that discourages any real faith that might fly in the face of rationalism. Yasmine el Rashidi’s Chronicle of a Last Summer suggests the small steps taken by individuals trying to chart a path between complicity and integrity, always confronted by institutions and more powerful individuals who can, at a moment’s notice, implicate anyone in an invented conspiracy and, in the process, force that person back to square one, or worse. The honesty of her writing may prompt el Rashidi’s readers to confront the ethics of personal choices and, like her protagonist, may prompt them to ask how they “landed” in their particular lives, their particular place in history.

These particularities and the growing focus on individual subjectivity in Islamic societies include the question of the changing consciousness among Islamic women (and, consequently, the question of the changing consciousness about Islamic women), and they are tangled in questions of authorization. If we can dismiss as overly generalized a concept like “the Muslim,” we can certainly agree that “the Islamic woman” is similarly oxymoronic. Imbricated in the question of women’s rights are the related questions of gender roles. The vexed topic of public homosexual self-expression is playing itself out within Islam in ways that the West finds stark but generally recognizable since Europe and the Western Hemisphere continue to argue over most of the same contentious issues that disturb Islamic cultures. As with other religions, accepting that early doctrinal pronouncements reflect the age in which they were enacted leads to the dilemma of whether or not to allow such notions to adapt to one’s own age, or, conversely, whether one must try to live as though this is Medina in the year 800.

Similarly, the notions of free speech and freedom to leave Islam once one has embraced it are upsetting in much current writing. The majority of Westerners brand the imposition of the fatwa as a medieval brouhaha, objecting that individuals are unlikely, in any case, to have their faith and value systems overthrown by such fictive worlds as those in Rushdie’s novels. As with any person, there are aspects of Ayaan Hirsi Ali’s experience that are, indeed, unrepresentative of anyone other than herself—yet, various objective international reports would easily demonstrate that she is speaking for many, many others. Whether she is also intemperate, “Islamophobic,” or self-aggrandizing are separate considerations (and she has certainly come to very strong conclusions). However, the threats that she and Rushdie have received from other Muslims demonstrate the Angst that is a constant within contemporary Islam—and, thus, also demonstrate the need for writers like Eboo Patel and Reza Aslan, ecumenicists who are familiar with belief and modernity. Indeed, perhaps the fearful response some Muslims have to writers like Orhan Pamuk and some of the others discussed in this volume suggests that there is today a growing library of ‘universal’ fiction, Islamically-inspired, that embodies the existential challenge facing all of us, across cultures—an archive that the West would do well to encounter with the regularity that it has been taught to engage with a David Copperfield, an Emma Bovary, or a Jean Valjean.

“In this current historical and political moment, Hawley reminds us that Muslims are positioned in relation to their own class and cultural identities; their own histories; their sensitivity to the diversity of cultural traditions and to the questions and conflicts within them; their own relations to the West; their interpretations of religious law; and their concepts of the role of women in contemporary society. For me, the most compelling aspect of Hawley’s books is his study of issues that concern Muslim women and that have brought Muslim women to the attention of international organizations, such as rights, citizenship, and circumcision.”
Nyla Ali Khan
Author, Islam, Women, and Violence in Kashmir

“Islam in Contemporary Literature revisits the overpoliticization of “clash” and opposing contentions; it highlights and questions human mêléé of today along human historical intolerance and mutual ignorance not only between but within the East and the West, Orient and Occident, Self and Other. Analyzed through a literary-cum-cultural lens, John Hawley dissects the stereotypical and caliphal religiosities or secularities that surround pre- and post-9/11 extremities, be they based on Islamophobic or crusading mindsets. This book explores Islam’s “ecumenical” wisdom statistically and discursively, while diverse literary, fictional and reflective voices from the modern Islamic world and its nationalistic pluralities (Said, Tahir, Hamid, Shamsie, Eltoukhy, Chraïbi, Rushdie, Aslan and many others) are researched to challenge the monolithic interpretations that refuse transcendence over orthodox (mis)understanding. Cross-disciplinary in spirit, the volume foregrounds dangers of (mis)reading religions generically or myopically, asking for an appraisal of underlying multiplicities in the form of “freshly-imagined” and reshaping communities. Doing so, Islam in Contemporary Literature foregrounds the human spirit of being faithful. The book is a must-“consult” for researchers who contest prevalent reductionist, prejudiced, parochial, bigoted or patriarchal attitudes.”
Waseem Anwar
Professor of English, Lahore, Pakistan

John C. Hawley is Professor of English at Santa Clara University, USA. Former President of the South Asian Literary Association and currently on the executive committee of the African Literature Association, he is the author of many journal articles and the editor of 16 books, including The Postcolonial Crescent; Encyclopedia of Postcolonial Studies; Historicizing Christian Encounters with the Other; and The Postcolonial and the Global. A former member of three executive committees for the Modern Language Association, and twice Chair of his department, he served as a Fulbright scholar at Humboldt University in Berlin, and was a Resident at the Rockefeller Center in Bellagio.

Islam in Contemporary Literature: Jihad, Revolution, Subjectivity is available now at a 25% discount. Enter the code PROMO25 at the checkout to redeem.