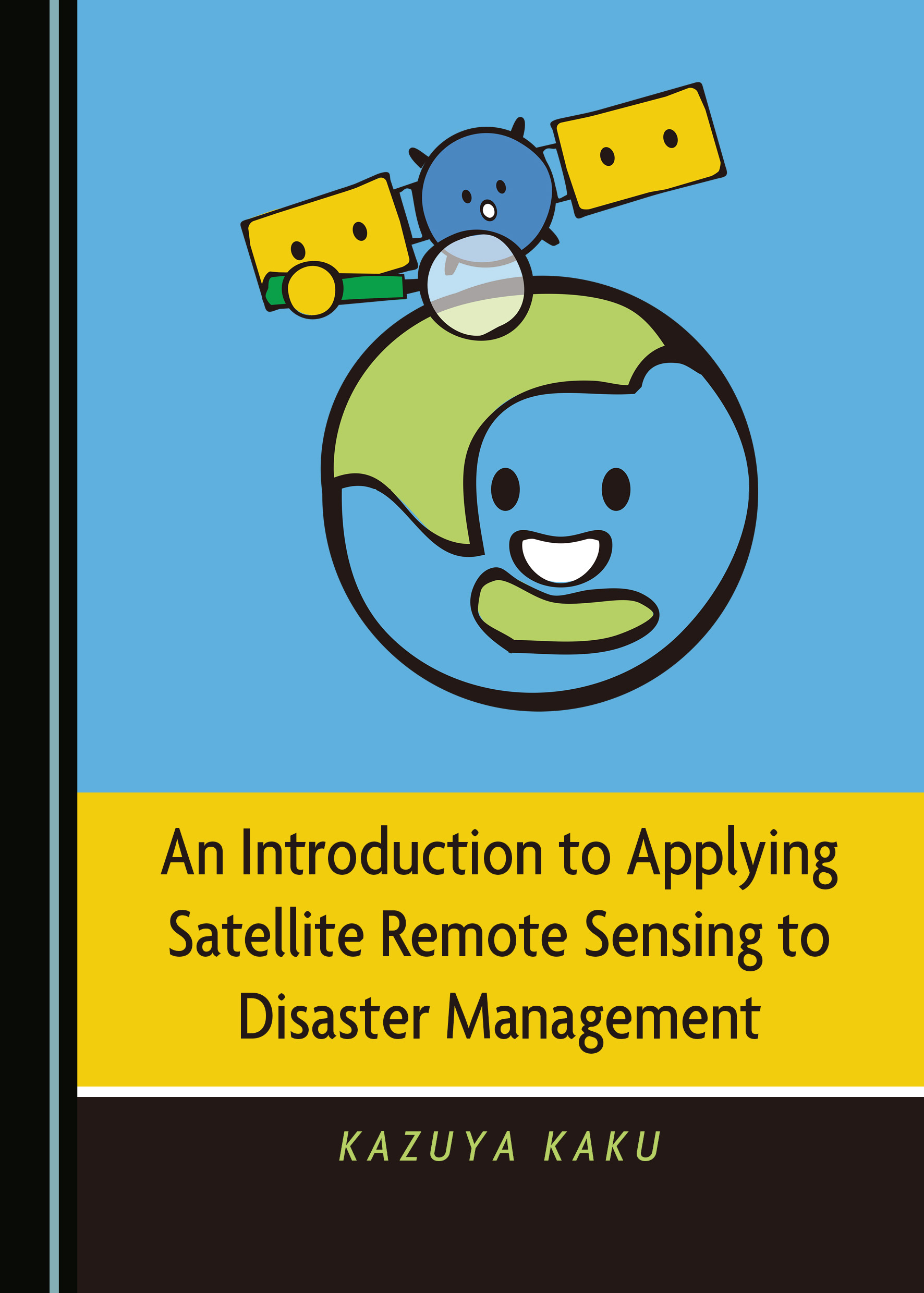 In Japan, the Japan Aerospace Exploration Agency (JAXA) engages in disaster management support activities using the Advanced Land Observing Satellite (ALOS), launched in January 2006. I have been involved in this activity of JAXA from the start. At the beginning, I did not know how satellite remote sensing could be applied to disaster management. More than 10 years have passed since then; this book summarizes the knowledge and experience gained during this period. 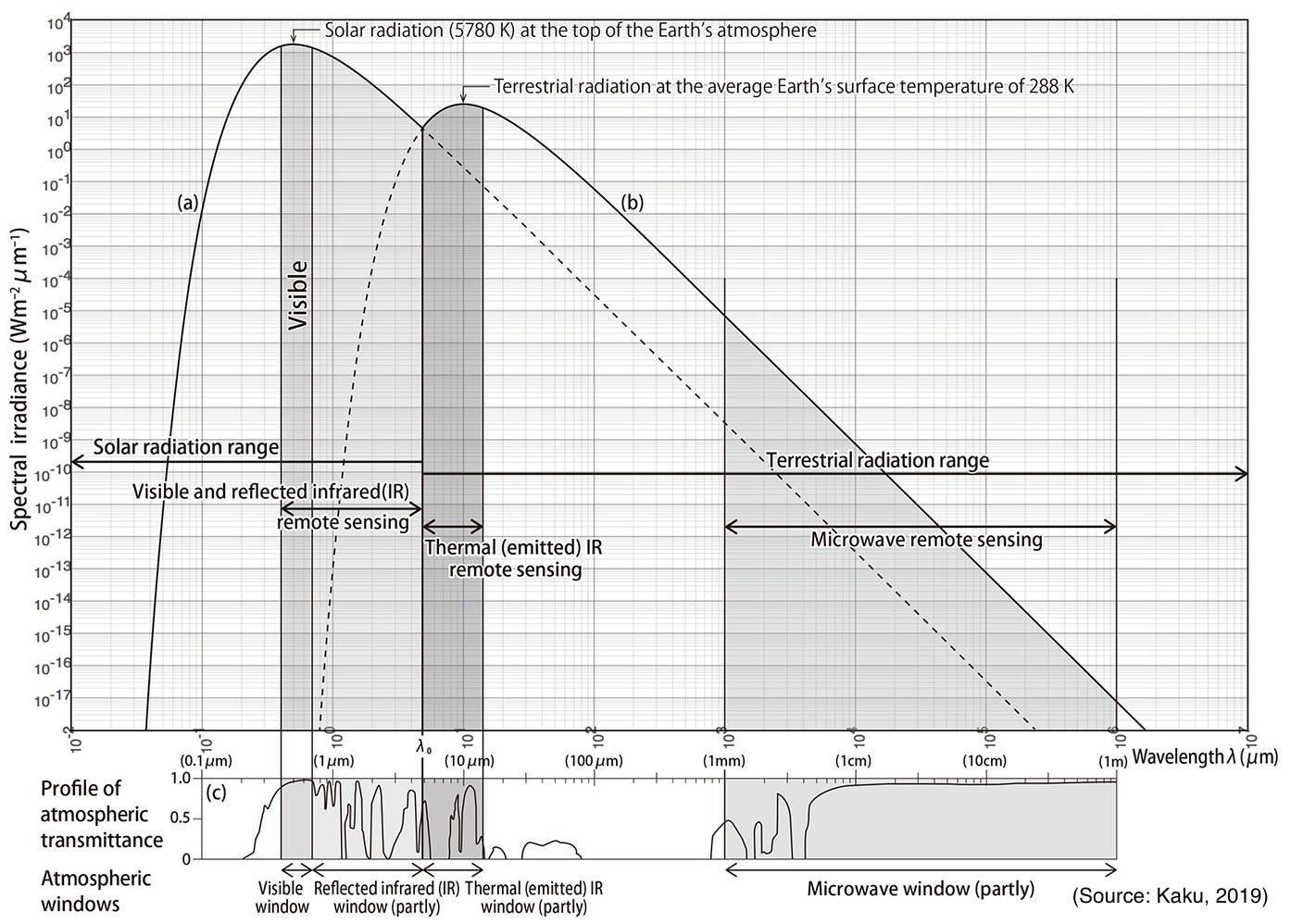 Fig. 1-2. Overview of passive satellite remote sensing with respect to (c) atmospheric windows and segregation of (a) solar radiation and (b) terrestrial radiation. Source of atmospheric transmittance: NASA Earth Observatory. (a), (b): with MAC/Graper v2.

This book has three themes:

(2) Case studies on areas of disaster management to which satellite remote sensing is applicable (Part II).

(3) A holistic study on how to apply satellite remote sensing to disaster management (Part III).

“Dr Kaku’s work is distinctive for this research domain. This research may indeed prove to be significant to fellow researchers and scientists working in the same discipline. This book provides a comprehensive and detailed description of his research.”
Dr Stephen E. Haggerty

“This is a unique book that covers all aspects of the disaster prevention and management applications of space technology. In particular, there are many specialized books and academic papers on remote sensing on satellite image analysis technology, but this book focuses on policy issues such as examples of disaster management, why it was successful, and frameworks, etc. This book is very useful and recommended for those who are interested in such activities and want to improve disaster management in their countries.”
Dr Shiro Kawakita
Senior Engineer, Japan Aerospace Exploration Agency (JAXA), Japan; Secretariat, Sentinel Asia

“This book is a good, probably the first, primer for those who are working in disaster risk reduction, such as emergency responders, policy makers, administrative officials, researchers and students. It covers (1) the basic principles of satellite remote sensing as a technology and the entire satellite remote sensing as a system, which are easy to understand with many illustrations; (2) many case studies based on collaboration between satellite-remote-sensing experts and disaster management practitioners who are the users of satellite-remote-sensing data/information products, which clearly demonstrate how satellite remote sensing can support disaster management operations in collaboration with the users; and (3) a holistic study based on case studies, which derives requirements for applying satellite remote sensing technology to disaster management. [The] user-oriented approach is also a feature of this book; probably no one can find similar books.”
Koji Suzuki
Executive Director, Asian Disaster Reduction Center (ADRC), Japan; Visiting Professor, Kobe University, Japan; Co-Chair, Emergency Preparedness Working Group of APEC

Kazuya Kaku received a Master’s degree in Applied Mathematics and Physics from Kyoto University, Japan, in 1978 and a PhD from the Graduate School of Information Science and Technology of Hokkaido University, Japan, in 2010. He previously worked with the Japan Aerospace Exploration Agency (JAXA) and the Sentinel Asia project to support disaster management in the Asia-Pacific region by applying satellite remote sensing and Web-GIS technologies. He is currently a Visiting Researcher at the Asian Disaster Reduction Center (ADRC), Japan.

An Introduction to Applying Satellite Remote Sensing to Disaster Management is available now in Hardback at a 25% discount. Enter code PROMO25 at checkout to redeem. eBook available from Google Play.