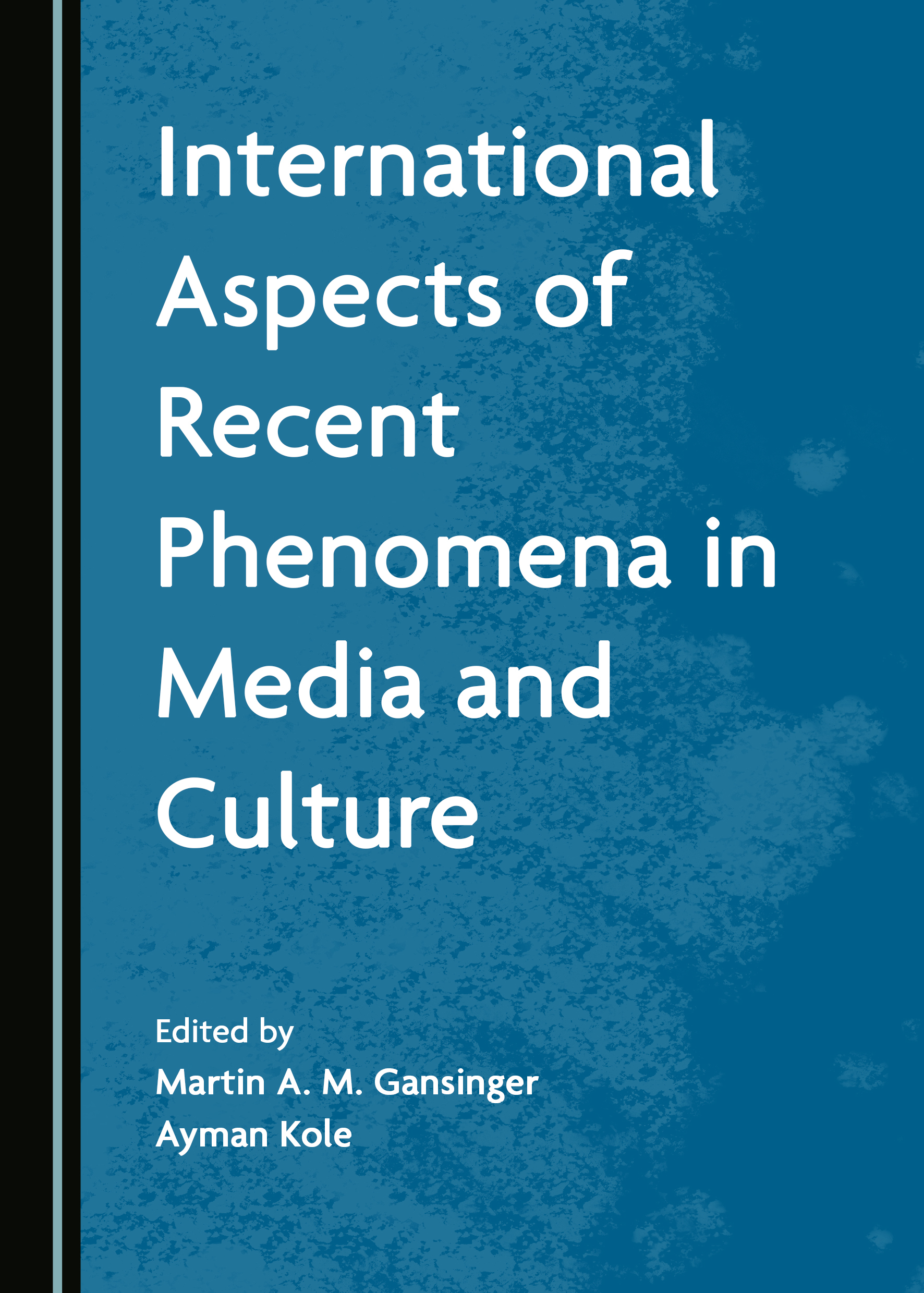 Edited by Martin A. M. Gansinger and Ayman Kole

This book was compiled in order to connect the dots between past and present expressions of significant phenomena in media and culture. It attempts to provide a “big picture” perspective on how contemporary relevant manifestations of the entertainment industry, artistic expression, mediated civic engagement, technological infrastructure, or automated information control evolved from subversive surroundings, niche markets, and underestimated potentials to shaping forces in today’s society.

While the opening chapter, “From Home Video Violence to Homies Gone Violent,” deals with the overall exhausted issue of media and violence, it manages to unravel new aspects such as the compensative function of physical aggression on screen and in gangsta rap for a more and more domesticated society in which every tweet bears self-destructive potential. On the other hand, the contribution outlines the shift from street corner gang violence to “internet banging”, or the dislocation of turf wars into “social media hoods.”

The following chapter on the exploding popularity and commercial relevance of battle rap—presented in its raw, acapella form on an increasing number of platforms from New York to Beirut—not only portrays the surprising and refreshing “back to the roots” approach of the world’s best-selling subculture, but furthermore demonstrates the return of political commentary and a direct influence on the output of recording artists. Political articulation and the relocation of protests—“From the Streets to the Tweets”—is the topic of the next contribution, where the evolution of the Black Lives Matter movement is discussed with reference to the cases of George Floyd and Breonna Taylor.

Chapter Four acknowledges the evolution of the video game genre “From Cutting Heads to Cutting Edge,” from being housed in arcades and stigmatized due to its addictive and violence-inducing potential to a testing ground for technological advancements that continue to alter professional and private environments. One of the latest examples is the introduction of Non-Fungible Tokens in games like Fortnite that pave the way for the modus operandi in Zuckerberg’s Metaverse phantasies. Not only are video games readily available on stationary and hand-held devices, the increasing gender and identity discussions around the gaming industry and community, as well as the growing recognition and acknowledgment of E-Sport athletes, underline its social influence and acceptance.

A similar amount of influence may be attributed to the ever-more professionally produced Turkish dizis discussed in “Conversion by Soap.” Taking into consideration the adventurous and shameless adaptations of the early Turkish film industry that exploited the absence of copyright regulations to craft hilarious rip-offs such as “Tarzan in Istanbul,” “Turkish Spiderman,” or “Turkish Star Wars,” the authors portray today’s incredibly successful soap opera and TV show productions as a major driver of the Turkish tourism industry and immense soft power tool for public diplomacy. The political impact of media content is discussed as well in the following contribution, which analyzes the effect of political statements articulated by French politicians in the wake of the Charlie Hebdo attack and the beheading of Samuel Paty on the country’s international relations, reaching from protest and manifestation in the Arab world to the boycott of French products.

The continuing shift “From Mainstream to Live Stream” among the youth in the Middle East and the resulting increase of civic engagement are outlined in Chapter Seven. Specifically, the authors aim to provide an overview on the literature dealing with the central category of media trust. The level of trust towards official media sources is particularly low in most countries in the North African and Middle Eastern region, even after the changes that occurred in the wake of the Arab spring uprisings. A central factor in the democratization processes in the Arab world has been the growth of transnational media networks such as Al Jazeera, which is discussed in the next contribution. The biggest issue in this regard is the ongoing level of state censorship, with the “Moroccan Red Line Roulette,” including criticism of the royal family or the questioning of the country’s territorial integrity, being focused on here.

The policy of the North African kingdom in regard to the challenges posed by the COVID-19 pandemic is the principal interest of another contribution, which focuses on the aspect of media illiteracy and the passing of Law 22-20. While Morocco is one of the countries with the highest degree of internet use worldwide, large parts of the population lack the reflective potential to evaluate the ever-increasing content that is typically referred to as “fake news.” Next to exploring the philosophical question regarding the possibility of objective truth in general, the authors illustrate the government’s critically eyed introduction of Law-22-20, enabling the persecution of social media users that are out of line with official narratives and interpretations.

The question of international repercussions due to the augmented pressure of conformity exercised on official and alternative media outlets following the outbreak of the pandemic in 2019 is raised in the concluding contribution, “Into the Global Chinese Village?” After providing an outline of the impressive Chinese efforts regarding cyber sovereignty, online surveillance, and censorship, the newly established “one party-system in science and journalism” rolled out in the Western world since the days of COVID is subject to a critical reflection by the authors. A central aspect here is the problematic establishment of oversimplified binary categories, the attribution of scientific research and official governmental policies of countries such as Sweden, Denmark, and Norway as medical disinformation, and the discrediting of opposing voices in media and science. State-ordained fear-mongering, leading to involved psychologists publicly reflecting on their unethical behavior in the UK, the selection of “experts” conveniently backing intended political measurements, and the openly expressed admiration of Western politicians such as former Austrian chancellor Sebastian Kurz for China’s economic performance (and social engineering power?) suggest an increasing willingness to re-structure societies according to the model provided by the Chinese Communist Party. Tools and instruments “made in China” such as lockdowns, QR codes on smartphones, and the incorporation of credit-seekers’ online behavior into existing categories provide the means for the potential global export of the social credit system.

Hence, this book can be seen as both, a celebration of past and present achievements of creative expression, artistic articulation, cultural contributions, and mediated movements for the sake of liberalization and democracy, and a warning against a “cultural revolution” defined by censorship, suppression of pluralist opinions, unnatural conformity in science and journalism, and the distinction between “fake news” and “fact” handled by artificial intelligence or part-time fact checkers.

“As a professor of media studies in the US, I have long wanted a book like this one. We live in a globalized media landscape, where trends in one country affect trends in another; it is increasingly important for students to understand the impact the media have worldwide. In this new book, the authors have their finger on the pulse of major issues in media: they offer new perspectives in the ongoing debate about whether viewing violent media affects our behavior; they analyze cultural and political perspectives in video games; and they explore the use of social media by movements such as Black Lives Matter. But they also offer important insights into media effects and controversies in countries like Morocco, Turkey, France, and China; information that was previously not widely available. I especially like the user-friendly style: while each chapter is thorough and scholarly, the authors write in a manner that will be interesting (and understandable) for students. And this book will also be a useful resource for professors.”
Donna Halper
Associate Professor of Media and Communications, Lesley University, USA

“This compilation of essays addresses the ethical and academic implications of many global trends, using up-to-date examples. These current discussions, in my view, will be welcomed worldwide.”
Dr Jane L. Chapman
Professor of Communications, Lincoln University, UK

“From Charlie Hebdo to Black Lives Matter, citizen journalism to Al-Jazeera, gangsta rap to soap operas, this book accurately carries stimulating and intellectually-engaging perspectives that capture the true face of international media and culture studies in an age of continuous disruption. Martin A.M. Gansinger and Ayman Kole deserve more than just praises for giving us this must-read book that anyone interested in contemporary mediacentric developments around the globe, particularly in the Middle East and North Africa will find richly rewarding.”
Bruce Mutsvairo
Associate Professor and Chairman/Global Media Studies at Utrecht University, Netherlands

Martin Abdel Matin Gansinger studied Communication Science and Political Science at the University of Vienna, Austria. For his dissertation on improvised music and intercultural communication, he conducted ethnographic research in Ghana and among the Bobo Shanti Rastafarian Mansion. Alongside a long-term field study on intuitive instructional speech in the Naqshbandi Sufi order in Cyprus, he worked at the European University of Lefke and Girne American University, serving as Head of the Radio/TV/Cinema and PR Department. After completing studies in Taoist health practices in France, he currently holds the position of Assistant Professor at Al Akhawayn University in Ifrane, Morocco.

Ayman Kole received an MA in English from the University of Sydney in 2006, and wrote the short story “The Mirror”, which was a Phoenix Journal finalist. He has wrote for various publications and worked as a Lecturer in English, Film and Creative Writing at various universities. He completed his PhD in History, English and Creative Writing at Charles Sturt University, Australia, and is the author of the historical novel Mark of the Crescent and various academic books. He currently lectures at Final International University, Cyprus.

International Aspects of Recent Phenomena in Media and Culture is available now in Hardback at a 25% discount. Enter code PROMO25 at checkout to redeem.