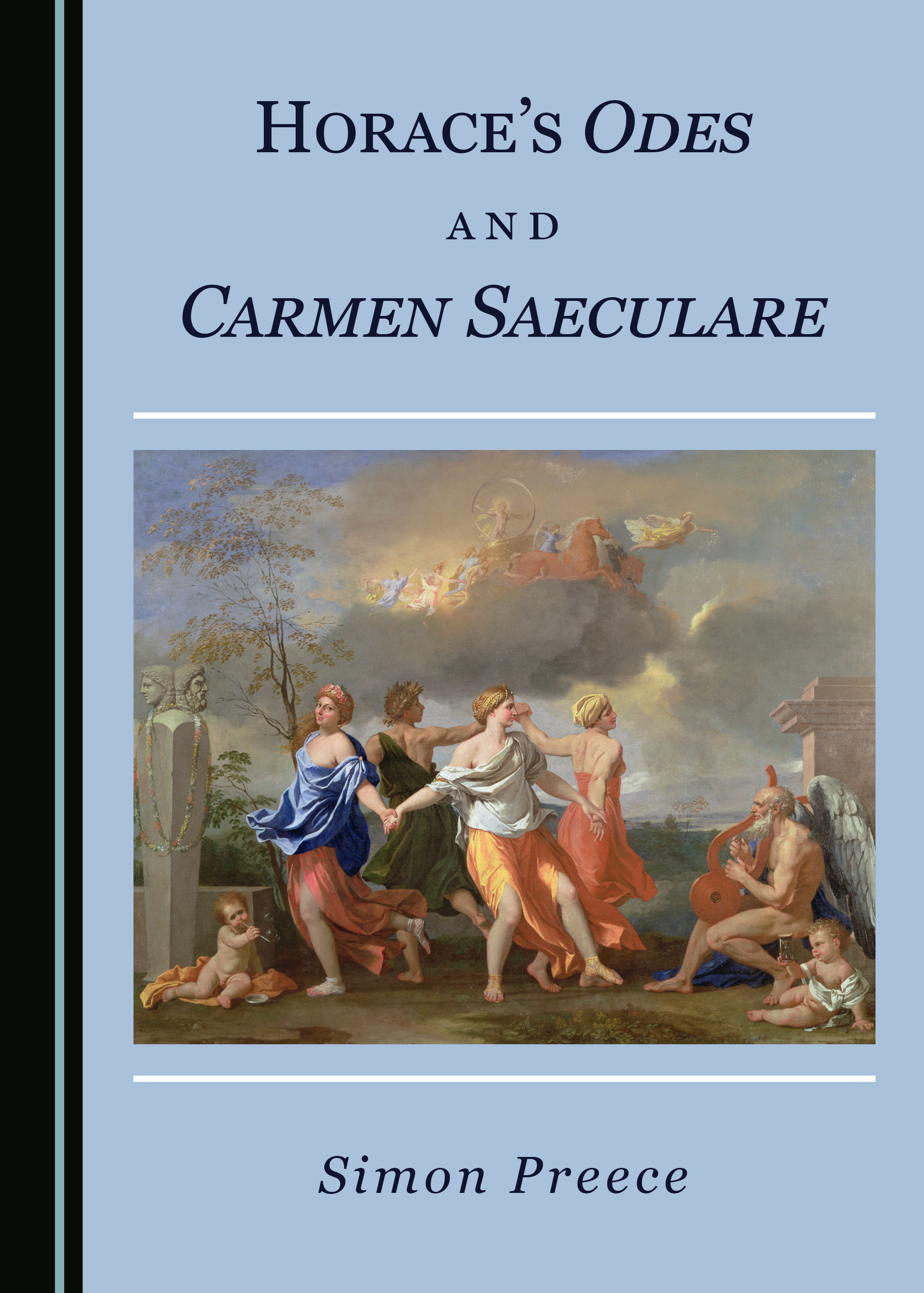 Amid the smoke and the wealth and the roar of Augustan Rome, Horace chose to write poems that drew their primary inspiration from the Archaic Greek Lyric poets of the 7th–5th centuries BCE. Indeed, as he proudly boasts, he even adapted their unfamiliar Greek metres to suit the Latin language. I have always been interested in why this appealed to him and why his Odes have continued to speak down the generations, despite many changes in taste and education. My instinct, now confirmed by the writing of my book, was that the metres themselves played an important part, not only moulding how Horace wrote, but also establishing the texture or feel of what Byron described as Horace’s “lyric flow”.

Although Dante and Petrarch, for example, show an easy familiarity with Horace’s poetry, the craze for translating his Odes into English did not begin until the sixteenth century, when Henry Howard, Earl of Surrey, and Sir Philip Sidney headed a cast of countless anonymous translators and imitators. The pattern was quickly set for the next five centuries: whether English versions stuck closely to the Latin or went their own way, Horace’s thirteen lyric metres were ignored. Rhyming iambics, so familiar in English, replaced Horace’s Alcaics, Sapphics, Asclepiads and Archilochians, so novel in Latin.

A few brave Anglophone souls have experimented with his metres, but, apart from Guy Lee’s skilful set (1998), none has met with much success. Lee was not only an excellent Latinist, but also one of the 20th century’s finest translators of Latin poetry. I set out in his footsteps with some trepidation. It seemed to me, though, that one should try to get even closer to Horace’s metres and meaning and yet avoid losing the imagination and verbal music that many poets have brought to their versions. Failure might show that, even if I could read Latin, I could not write English.

Power lacking judgment falls through its own sheer weight;

Power well-controlled the Gods even carry forth

To greater heights; but they abhor powers

Notice how the first line is end-stopped, while the second enacts its meaning by carrying over into the third. The fourth closes with a participle, which is separated from its noun (placed at the end of the third line) and which forms a rhyme with it, helping to link the two words. Meanwhile, the stanza is bound together by the repetition of the noun in three forms (uis; uim; uiris), and Horace uses the relative slowness of the third line as a launchpad for the rapid and accelerating fourth. However, he also exploits the difference in pace between the first half and the second of each of the first two lines, and uses m and o to give weight to his lofty pronouncements.

The stanza is elegant and sophisticated, but it is not untypical of Horace’s technique. Some positions within each line are evidently more emphatic than others. Here, and often elsewhere, the first and last words of lines gain stress from their position; thus, each mention of power is placed to tell strongly; sua at the end of the first line points to the paradox that it is its own weight that brings this type of power down. Then, in the second line, immediately after the mid-line word-break (caesura), di is in an emphatic position, but the tucking in of the relatively unimportant word quoque after it pushes further focus onto it (with metre reinforcing meaning). We have already noticed that prouehunt / in maius enacts its meaning, but there is also an emphasis gained both by the position of in maius at the beginning of the line and by the slight pause that follows it. The positioning of omne at the beginning of the fourth line accentuates that there is absolutely nothing power in the wrong hands will not attempt; and the statement itself would remind Horace’s contemporaries of the horrors of their recent civil wars. Finally, we must wait until the last word to make full sense of what is said: this third sort of power involves people plotting.

Much of the analysis in the previous two paragraphs relates not only to metre, but also to word-placing. Horace’s Latin is exquisitely intricate, with some words which go together grammatically being widely separated and others which would normally sit apart rubbing up against each other. Such hyperbaton (as it is known) gives the Odes their characteristic concentration and fizz. Indeed, I believe that translations using the original lyric metres will support readers who want to develop a feel for Horace’s verse. English is more restricted in its word-placing than Latin, but the metres themselves allow the translator to draw attention to some words while tucking away others, just as Horace does.

If the texts and translations form the heart of my book, its introduction and notes are designed to help readers build their own judgments about the poetry. Horace has benefitted from superb commentators in several modern languages and large numbers of earlier commentaries in Latin. Most of these have been aimed either at scholars or at students who are well-practised in Latin. I wanted to aid those whose language skills are fledgling or neglected, so I have translated all foreign languages into English, and I aim, both in the notes and in the introduction, to be gently stretching, but always accessible to a wide readership. It is also usual for modern commentaries to focus on just one book of the poems, offering more detail than is possible when covering all the Odes and the Carmen Saeculare. However, the first three books of the Odes were probably published together, and Horace’s patterning of ideas, with its serried themes and sundry variations, is much enhanced by considering all the poems together. My notes, then, form a commentary on all the poems, focussing on details of language, explaining references, offering alternative ways of reading passages, and looking at issues in the transmission of the Latin text which sometimes fundamentally alter what the poem means.

The introduction, by contrast, offers a more joined-up overview of what is exciting and important in Horace’s poetry. The first essay explores what we can and cannot say about Horace the man, about his friendships, interests and love affairs, and about his relationships with his great patron Maecenas and with Augustus. Such topics provide a backdrop for a brief consideration of Horace’s various collections of poetry, and are set against the broader backdrop of the civil wars which touched Horace’s own life. The second, longer, essay investigates the nature of Greek Lyric and some of the ways in which Horace’s Odes develop and differ from it, looking at the structural nature of address, how Horace’s conception of poetry differs from that of the Romantics of the eighteenth and nineteenth centuries, his playfully polemical stance towards the thriving contemporary genres of elegy and epic, and his widening of his own lyric genre to include deeper engagement with moral philosophy and with politics. It then moves on to focus on metre and word-placing, register and word-selection, and the ordering of the poems. Shorter essays then discuss the nature of my translations and give a concise history of Horace’s textual transmission since antiquity. It is unusual for a book aimed at a non-specialist readership to devote space to textual issues, but translators have to make choices about what text to translate, and, since I want readers to engage directly with Horace’s Latin and to form their own opinions, I think they should be made aware of some of the alternatives that the manuscript tradition and more than five centuries of scholarly conjecture have given us. Finally, a “Further Reading” section offers starting points for reading among the translations of previous centuries and of our own, commentaries aimed at students and at scholars, monographs using a variety of theoretical positions, and collections of essays.

The Horace who is a constant presence in the Odes, whether we regard him wholly as a literary construct or in part as a projection of the historical Horace, combines good sense with ironic detachment; he is rarely a bore and never a prude, rarely vulgar and never obscene; he is always up for a party, yet willing to face his own mortality with an unforced calmness; he is proud of his own merits, yet happy to mock himself; and he can move from austere prosiness to charming wit in a few words. Not every ode is a masterpiece, and each reader will find some poems more appealing than others; in particular, Horace’s panegyric verse will not be to everybody’s taste and some of his attitudes towards women will be unpalatable to many, even if it is recognised that in both areas he was a man of his times. However, in long poems and in short, whether grandiloquent or drily humorous, and on weighty topics and on frivolous, Horace rarely misses the mark. He is a fine poet and an unequalled craftsman.

Simon Preece studied Classics at Gonville and Caius College, Cambridge, where he performed the part of Orestes in Euripides’ Electra for the Cambridge Greek Play, and Singing at the Guildhall School of Music and Drama. He works as a classical singer in Britain and further afield, both as a soloist and as a member of many of the best-known professional choirs. His work also explores the poetry and music of 19th and 20th century Lieder, Mélodie and English Song.

Horace’s Odes and Carmen Saeculare is available now in Hardback at a 25% discount. Enter PROMO25 at the checkout to redeem.