Gaps and the Creation of Ideas 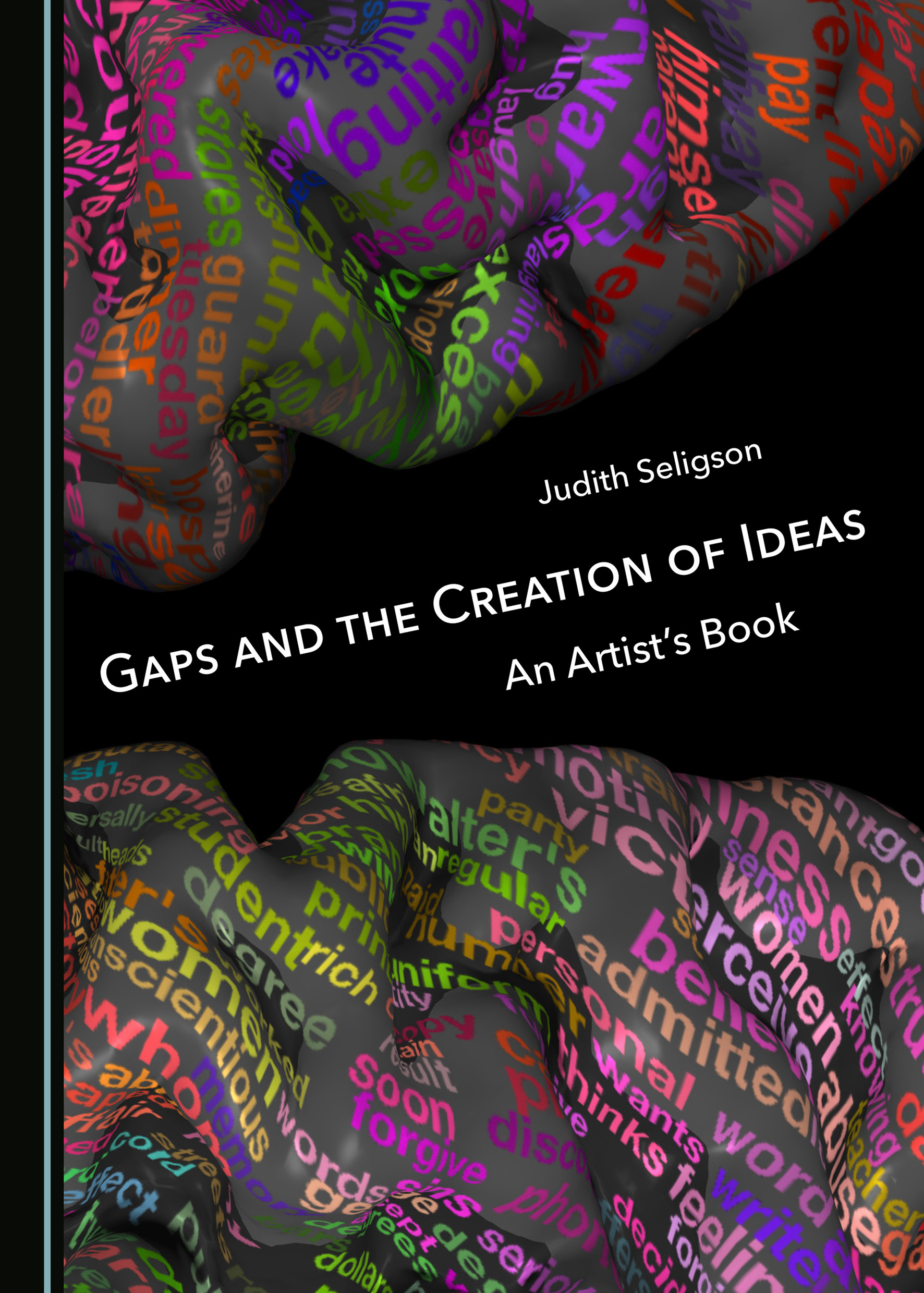 What is an artist’s book? The term conjures up images of something handmade, or at least quirky in its construction. Raphael Rubenstein’s limited edition A Geniza is a box with papers inside. Other artist’s books are sewn or folded like an accordion. From one point of view, Gaps and the Creation of Ideas is an artist’s book because it is not any other kind of book. From another, it bears that description because I, its maker, am an artist. From yet another, it is a book built by the poetic logic of juxtaposition, rather than the discursive logic of propositions and proof.

Juxtaposition is a discontinuity. Two things are contiguous, touching, yet remain discrete and discontinuous. Juxtaposition, by definition, generates a gap, however infinitesimal. Juxtaposition became increasingly important in multiple spheres of life as the 19th century came to a close.

An individual could experience these proliferating gaps as an opportunity for creativity, as did Paul Valéry, when he wrote “Gaps are my starting point.” Alternatively, she could see them as a terrible danger. How could one avoid falling into the gaps between brain cells? Tolstoy wrote in Anna Karenina (1877) of her husband Alexey Alexandrovitch, “Now he experienced a feeling akin to that of a man who, while calmly crossing a precipice by a bridge, should suddenly discover that the bridge is broken and that there is a chasm below. That chasm was life itself…” The Nazi is, in my view, an extreme case of Gap Anxiety. Nazis were sure that extermination of Jews, one of the gap strands, would obliterate all gaps in the One Volk.

In 2000, at the opening of an exhibition of my work that included both geometric abstract paintings and graphite text drawings, I was asked what the connection was between the two bodies of work. I immediately said “juxtaposition”, though I don’t recall ever thinking that before. The paintings are composed by juxtaposing shapes of color, the text drawings by juxtaposing lines of hand-written text. From the beginning, I saw these strands of text as neurons and the space between them as a synaptic gap.

Within a few weeks, I had assembled 150 slides of images of art that used gaps. In December of 2000, I gave a talk that incorporated the slides into what became the backbone of the gap story. I saw this project as a document of gap thinking. Naturally, it should be composed by the same logic—juxtaposition—that I was describing and documenting. I juxtaposed quotes and images that had, in my mind, some connection, some common element, as in a metaphor. The mind of the reader/viewer would act as a neurotransmitter, firing across the gap to continue the electric current, the narrative, or the theory. The gap would remain open for others to cross in their own way.

I thought that the logic of juxtaposition was my prerogative as an artist. However, I was torn between wanting to communicate discursively and wanting to make a work of art. I wrote hundreds of synopses and composed countless formats to present the images and quotes. I always came back to juxtaposition as the primary way to tell the story. It created a complexity and fire that none of the normal narratives achieved. Juxtaposition is a form of logic, a tool that gives the artist the power to organize material that is too complex for a discursive format. Many years into this project, I found a balance between the two forms of thinking that began to please me.

Wittgenstein wrote in his introduction to his Tractatus that the best he could do was make an album of juxtaposed statements, rather than tie it all together in a discursive narrative. I could never prove that the gap was overdetermined at the turn of the twentieth century and has been since. The best I could do was to show it.

I saw the examples accumulate. Hekkesh, a rabbinic hermeneutical method for interpreting the bible from the 2nd century, affirms that two statements, simply by virtue of being contiguous, have some relation to each other. Around 1900, Sigmund Freud formulated virtually the same statement, but referred to juxtaposed dream fragments rather than biblical verses. Interpreting the dream meant simply finding the common element in the two contiguous, but apparently unrelated, dream thoughts.

The poet has always depended on juxtaposition. A metaphor juxtaposes two different, unexpected elements, asking the reader to find the common quality. One is familiar, the other is not so familiar. Homer’s wine-dark sea juxtaposes wine and sea. In the mind of the reader, the particular inebriating, murky, drowning darkness of wine is attached to the sea. As such, the sea becomes, if not more familiar, then at least more known.

Women and weaving have long been associated with each other—from Penelope’s weaving and unweaving of Laertes’ shroud and Ovid’s Metamorphosis to Arthur Danto’s introduction to artist/weaver Sheila Hicks’ monograph. Plato’s dialogue, The Statesman, links weaving with kingship, for it creates harmony from opposites. Ovid retells the story of Arachne, the peasant weaver who dared to compete with Athena. I asked how far I could push the analogy between women, weaving, text, and brain structure. I began to think that a great text resembled the structure of the brain, and the brain resembled the structure of a great text—through the common structure of weaving and leaving gaps. I visualized the axons and dendrite extensions of the neuron as threads that weave intricately in the brain (or is it the mind, or both?). In 2012, Dr Van Wedeen, with his lab at the Martinos Center for Biomedical Imaging at Massachusetts General Hospital, captured images of the brain as a series of woven sheets.

Crucially, a weaving, however simple, has an aesthetic component. Arachne and Athena competed by weaving intricate images and symbols into their work. This concern with beauty in a weaving, a structure of juxtaposed threads, then reflected back on the structure of a text and of a brain. Works of art depend on the logic of juxtaposition. What we call stream of consciousness, or free association, is a series of juxtaposed images, one leading to the next. Though Freud is intimately linked with “free association,” his term, Einfall, meant “thing that occurred to him,” according to Freud’s translator, James Strachey. Freud had great faith in this mental process. No matter where one began, one thing would lead to another, back to “the genuine thing,” the true object of desire. A work of art, through this same method of juxtapositional einfall, collaborates with the reader to bring her closer to her own mind.

Wordplay requires juxtaposition. It implies that two or more words, whether close or far apart in a text, are juxtaposed in the reader’s mind. The rabbis used wordplay to tease out meaning in the Hebrew Bible. Some have called the rabbis’ method “creative philology” and the “molecular theory of language.” Each Hebrew letter is distinct and separate, like atoms in a molecule. Freud called it “syllabic chemistry,” while Nobel laureate and neurobiologist Eric Kandel asks, “Is there a Molecular Alphabet for Learning?” Jacques Derrida called it “grammatology,” since wordplay depends on the written aspect of language. It has also been called pseudo- (false) and simulated etymology. I, however, like to call it “poetic etymology,” since poets use the juxtaposition of words to evoke images. When Hamlet describes his uncle/now-stepfather as, “A little more than kin, and less than kind,” he is playing with the multiple meanings of “kind”—he is not kind, that is, he is not gracious; he is not my kind, that is, he is not the kind of person I am. “Kind” also resonates with “king” and with the German “kind,” child.

Wordplay implies the ability to turn the letters in a word around to make new words. The rabbis called this “tzerufah,” or the permutation or refining of letters. Derrida uses this anagrammatic method to find meaning in proper names. Through wordplay, juxtaposition implies that no one has the last word.

Judith Seligson is an artist and writer living in New York and Alexandria, Virginia. She has published articles in The Henry James Review, The Forward, Judaism: A Journal of Jewish Life and Thought, and The Radcliffe Quarterly. Her solo painting exhibitions include Jane Haslem Gallery in Washington, DC (1991, 2008), the Athenaeum (2016) in Alexandria, Virginia, and both Anita Friedman Fine Art (1996) and Galérie Mourlot (2016-2017, 2021) in New York City. The title of the 2021 exhibition is The More You Look, the More You See. She has two overarching interests in her work: finely tuned color intervals and visual intertextuality (text-image interaction). Her work also extends to collage, graphite drawings, photography, multimedia, videos, and pigment prints.

Gaps and the Creation of Ideas is available now in Paperback at a 25% discount. Enter PROMO25 at the checkout to redeem.