Dr Samways Writes to the Editor 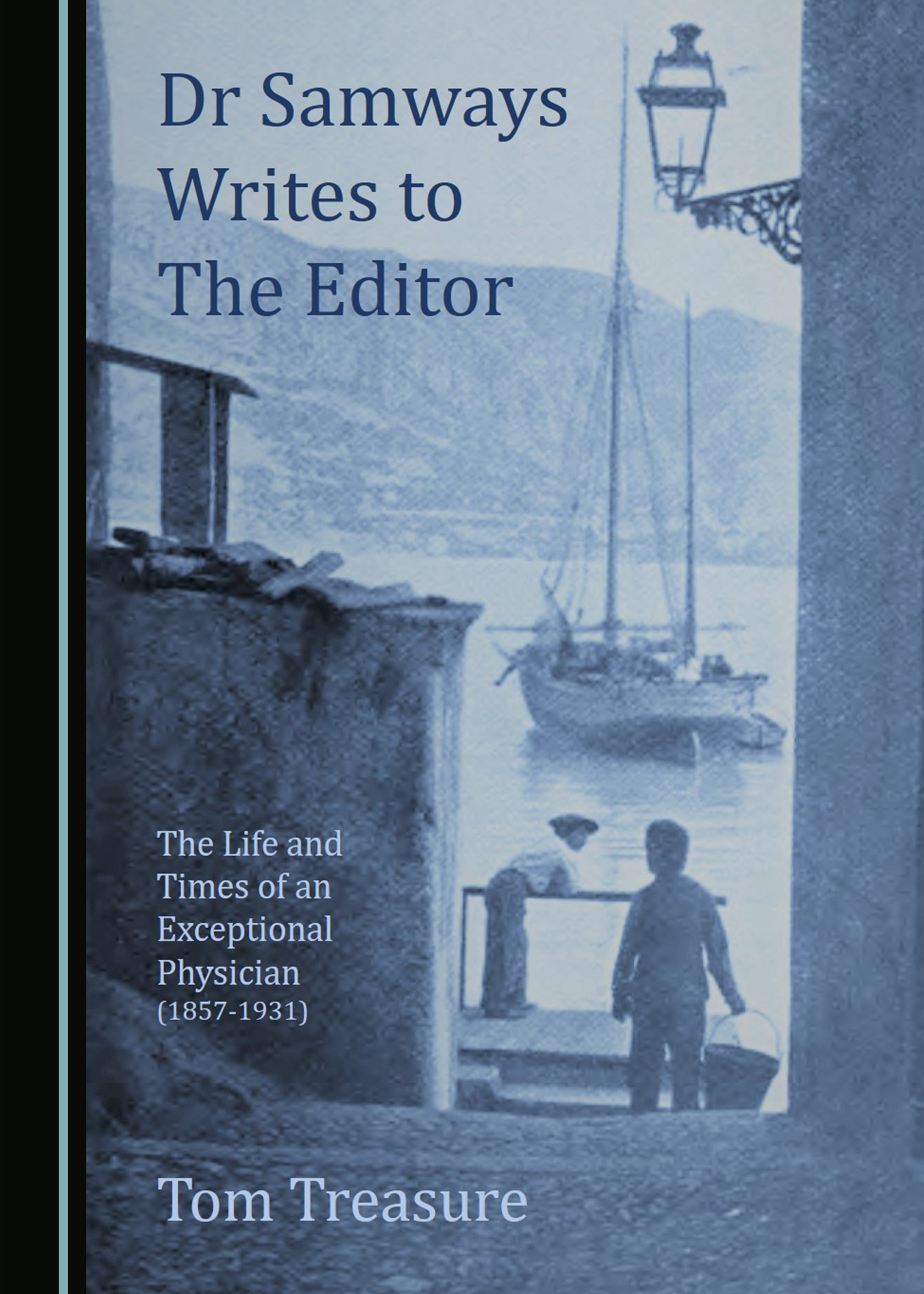 “When a horse falls under a heavy load, and begins to struggle to regain its feet, the usual treatment is to sit on its head, or otherwise hold it down, to prevent it damaging itself”. This was the first sentence of a letter in the British Medical Journal (BMJ) in 1921 and an example of Dr Samways challenging an eminent cardiologist. His message was to think first of the heart—the body’s workhorse. He advocated understanding what led to the fall, and how to calm it from struggling, before encouraging it to “regain its feet”. Daniel Samways was a general practitioner who had the apparent temerity, in his letter, to contradict the great and famous Sir James Mackenzie, but this was a long-running thrust and parry of pens. Their first exchange of Letters to the Editor was in 1897. It could have run forever were it not for the editor calling a halt: “This correspondence must now close”.

Going back to that earliest correspondence in 1897, I found that Samways had also written “Letters to the Editor”, taking to task William Osler and Ernest Starling. These names—Starling, Osler and Mackenzie—are very familiar in the teaching of cardiac physiology and pathology to medical students. Most medics would recognise two or all three of those names, but I have yet to find anyone who has heard of Daniel Samways.

Intrigued by his confident contradictions, the quality of his scientific evidence and the cogency of his arguments, I started a search for more information about Daniel West Samways. From contemporary records, I found that he had graduated from Cambridge in 1881 with a first and a distinction in Physics. In the same year, he passed the London DSc examination. He then carried out much-praised neurophysiological experiments in Zurich, which were published in German in Flüger’s Archives. He had returned to Cambridge to be a lecturer in physiology and was elected a fellow of St John’s College in 1885. He went to Guy’s Hospital to study medicine and graduated in 1893. He progressed to postgraduate research, correlating the post-mortem findings and clinical features of 196 patients who died from rheumatic heart disease. This provided the material for a Cambridge MD in 1895, which was the evidence from which he pointed out errors in the writings of Osler, Starling and Mackenzie. Meanwhile, he had gained the Paris MD in 1895 based on further research, published in French and English in 1896. This added weight to his arguments with these three great men. However, whilst they were knighted and are revered to this day, Samways has been forgotten.

What I have written here, as an orderly chronological progression, was, in reality, discovered as fragments of information, retrieved piecemeal, from when I first began my work on Samways in the 1980s, hand-searching dusty volumes in libraries and archives. What had happened to Samways? Why was this man with a stunning academic CV not better known or, as seemed to be the case, completely unknown?

When I first looked for him in the Medical Directory, I could not find his name and yet his degrees and affiliations, heading his pieces of published work between them, listed three doctorates, his membership of the Royal College of Physicians and his affiliation as a late fellow at St John’s. I then noted that some of the letters had been posted from Mentone [sic], France. There I found him listed for the year 1900 under Practitioners Resident Abroad. During the winter season, he could be found at Mentone, from May 15 to July at Brides-les-Bains, Savoie, France, and at Crouch End in London for the summer. In the 1990s, I had spent a mid-career sabbatical at the Wellcome Institute for the History of Medicine and for the next four years served on the research grants committee. I was the nominal medic on a panel of a dozen or more professional historians. I was impressed by their scholarship, their common ability to read a number of language and their innovative use of primary sources. Over coffee, I mentioned this peripatetic doctor to Anne Crowther, an Australian, then professor in Glasgow. She explained it to me: Dr Samways was following his patients to the health resorts.

In that critical year of 1897, Samways had written in the BMJ under the headline “Fashion in the Climatic Treatment of Phthisis”. He referred to the published account of a meeting of the Balneological and Climatological Society. A few of those words might need explanation. Tuberculosis was endemic and, while the everyday word for it was consumption, doctors mainly used the Greek equivalent—phthisis—which simply meant an illness with profound wasting. Balneology is the study of bathing in natural spring water with high concentrations of natural minerals, such as found at Brides-les-Bains. As for climatology, it was widely recognised that going to a warmer, drier climate gave the body a better chance of recovering from tuberculosis. Samways had caught tuberculosis, very likely from working in the post-mortem rooms. He had fled London in February 1893, interrupting his research. This came out in a letter in the BMJ in 1899 and in 1901 in his guidebook, Mentone as a Health and Pleasure Resort. He had stayed in a hotel in Mentone with three other residents with tuberculosis and then took an ocean voyage, spending the next winter in the southern hemisphere. However, it was to Mentone that he attributed his recovery. He decided to stay there and practice medicine as a general practitioner. In 1896, he had written about the nature of medical practice in France, disparaging the “druggist” and the “sage-femme”. These letters reveal the context in which he sought to secure his entitlement to practice as a doctor in France. He attended the necessary lectures and teaching ward rounds to pass the Paris MD examination.

Rheumatic heart disease and tuberculosis were common endemic diseases of the day; through study of one and personal experience with the other, Samways knew most of all there was to be known about both. In this new life as a general practitioner, he observed the full gamut of disease, but with the critical eye of a highly trained medical scientist. He applied his highly analytical mind to how maladies might be best treated and to the results. In well over a hundred articles, comments and letters over around 30 years, he wrote about the commonplace and the arcane: piles, mosquito bites, horse dung in the streets, influenza, spitting, drug addiction, ruptured bladder, spontaneous disappearance of cancer, administration of oxygen, water on the lung, vaccination against smallpox, cardiac tonics, bloodletting, sea-water injections and so on. In this way, Dr Samways serves as a guide and chronicler. His observations are astute, but, more importantly for a student of history, he also leads us to the writing of others. He was a catalyst for debate, which sometimes became heated.

The Lancet in November 1907 published a paper on pleural effusion—water on the lung — by Sir James Barr, who was well known as a pugnacious Ulsterman. Dr Harry Campbell questioned his understanding of the physics involved and, by February 1908, they had written four times each. Samways had joined in, seeking to be an intermediary by explaining the physiology and, of course, the physics underpinning it. In his increasingly lengthy responses, Barr resorted to sarcasm and bombast. In his last letter, he complained to the editors about some typos, but took the argument ad hominem:

“I would not have troubled about these trivial mistakes only I am dealing with two soi-disant philosophers and I don’t want even a printer’s error to creep into my letter.”

The editors denied Barr the last word, writing in February 1908:

“The various parties to this correspondence have had ample space to expound their views, and none of them can complain of the undue vigour of their opponents’ language, for none of them have failed to reply with equal vigour. As they cannot all have the last word, we supply it. This interesting discussion must now cease.”

Reading these letters, as a chest surgeon, I felt a great deal of sympathy with Barr and Campbell’s difficulty in finding common ground. Samways’ basic physiology and knowledge of physics were of no help because the vocabulary and definitions had not been standardised. It was a few years before the simple chest X-ray would come into clinical practice. They could not see inside the body, by imaging or endoscope, as we can now. Incising or even an exploratory needle was fraught with danger. A fatal collapse of the lung might follow, and they did not have the means to retrieve the situation.

Dr Samways did not go back to France when the war started in 1914. He took a post as a resident doctor in a war hospital in Exeter. He dealt with war wounds contaminated with the mud and filth of the trenches, often made worse by journeys in the cattle trucks of makeshift ambulance trains. From the war hospital, his letters continued, but none mentioned chest injuries. None survived to reach him; during 1914-18, the war’s most penetrating chest wounds resulted in death on the battlefield. However, he could apply his knowledge of physics and his resourcefulness to devising better means of irrigating and disinfecting wounds, splinting of fractures and giving hundreds of anaesthetics. After the war, he returned to his pattern of life: winter and spring in Mentone and summer and autumn in Devon, until the last winter of his life, dying at home in Devon in 1937. My book tells the story of both his family background and his professional life. He married in 1901, but had no children and was the only son of his father John Samways. I found no diaries or family memorabilia, but lecture slides from his Cambridge days are in the Albert Memorial Museum in Exeter.

Tom Treasure has published more than 750 journal articles, a dozen books and many book chapters, mainly related to his life’s work as a prominent heart and lung surgeon. A lifelong interest in history led to a mid-career sabbatical at the Wellcome Institute for the History of Medicine, followed by four years on its research grant panel and authorship of chapters on the history of surgery. His professional achievements include election to the Council of the English Royal College of Surgeons, and he served the European Association for Cardio-Thoracic Surgery in various capacities, including as President. His literary duties have included serving on the editorial boards of the Royal Society of Medicine, the British Medical Journal, Heart, Thorax, and The Lancet. He was Professor of Cardiothoracic Surgery at Guy’s Hospital, London, and is now an Honorary Professor at University College, London.

Dr Samways Writes to the Editor: The Life and Times of an Exceptional Physician is available now in Hardback at a 25% discount. Enter PROMO25 at the checkout to redeem.