A Translation and Interpretation of Horace’s Sermones, Book I 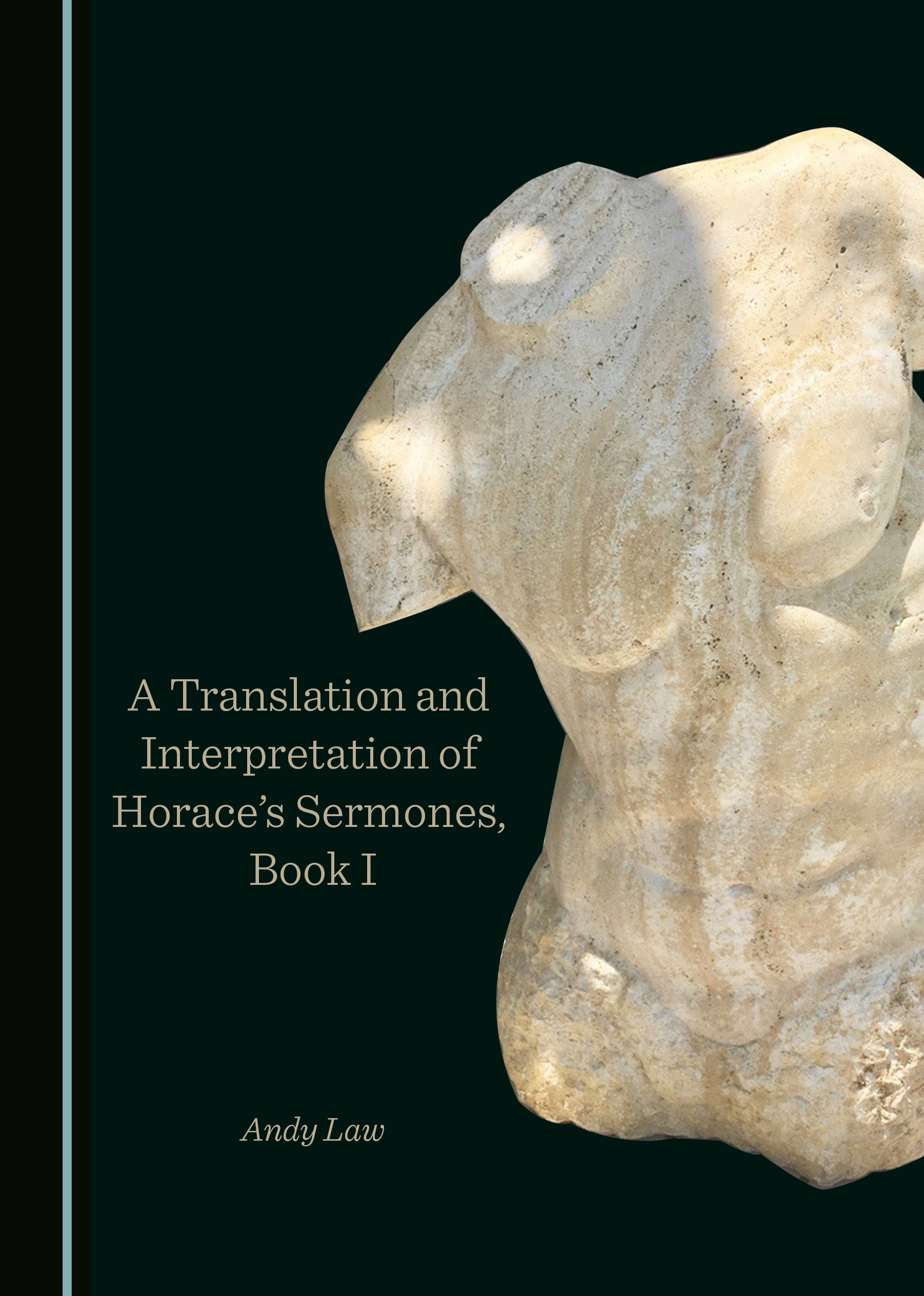 In my working life as a business consultant and writer, Classics for me thrived in a narrow space that was always more than a hobby but never a career.

I am not an academic, yet my bookshelves at home essentially constitute a small classics library of almost 900 books. Over the years, I had the money to buy texts, commentaries and various historical analyses, but I didn’t have the time to do much more than ‘dabble’. I was fortunate to be able to retire at 60, so now I do have the time, and I can draw down against 40 years of investment in Latin, Greek and Ancient History, and go deeper.

Niall Rudd influenced me hugely at University in the 1970s. His Horace tutorials were so mesmerising that, at times, he seemed to become the physical embodiment of the poet himself. I was transported. I guess this is why Horace now occupies the largest percentage (some 14%) of my classics library and why he was an obvious author to revisit with more focus. Obvious but foolhardy? I’ve avoided the temptation to calculate the number of books written about Horace and his works. Can we just agree that it’s a huge number and that his genius has generated more books and papers than most other Roman writers? Who wants another book on Horace, and one not written by a professional academic?

If you are interested in writers, you are interested in their words. The artist Rachel Whiteread recently, and beautifully, described poetry as “the sound of words touching each other”. Whiteread’s comment could not be more apposite to the poetry of Horace. All readers of Horace know that his words touch each other and set off all manner of sonic undulations. I particularly wanted to find out more about Horace’s first published words, the Sermones [Conversations]. Any artist’s first public outing is surely issued with trepidation and self-doubt, even if it is received as a mature and confident piece of work and is highly acclaimed. Did Horace communicate such hesitancy? My inquiry turned into a book: A Translation and Interpretation of Horace’s Sermones, Book I.

Verbal interconnectivity and wordplay are just two of the (many) hallmarks that quickly become apparent when reading the 10 poems that make up his liber primus sermonum. They naturally demand that Horace’s libellus (as he called it) be read as a unified whole. They also insist that we pay attention to the words and follow them. When, in sermo 1, Horace writes, ‘ne te morer, audi / quo rem deducam’ (‘so as not to keep you any longer, just follow the thread of my argument’), he hints up front that we must work our way through a threaded artwork, a verbal tapestry. sermo 3 draws our attention to the powerful effect of the spoken word, and sermo 4 to the powerful effect of the written word. Words can raise you up and bring you down. What we say about each other, and what we write about each other, matters. This was true then, and is true now.

Horace’s libellus is, in many respects, a clamorous crowd (turba) of words. Just like a crowd, the words bump into each other, greet each other, embrace each other, play, fight, cry and laugh. Words grow legs and move around from one sermo to another. The turba is embodied in the metrical feet and membra (limbs, but also sections) of the hexameters, and it is in this embodiment that we find some of the physicality of the age and the poet who is living through it.

Horace employs a range of verbal tactics to place his words centre-stage. With a schoolmaster’s ABC identification, he points out connections, links and signposts. When Horace asks us to ‘choose anyone you want from the middle of the crowd’, (‘quemvis media elige turba’, 4.25), he is asking us to select from a list of examples of (alphabetic) character types embedded in his crowd of words. The character types are initially dominated by the letter A (‘avaritiam’, ‘ambitione’, ‘amoribus’, ‘argenti’, ‘Albius’, and ‘aere’). We might expect further examples beginning with B, C and D and so on, and, later in the book, Horace duly obliges. In sermo 5, Horace’s first port of call out of Rome is Aricia and his last is Brundisium, intimating ultimately a trip that, on paper (charta), makes almost no progress at all. This verbal animation, which is more than simple wordplay, and more than the natural elasticity afforded by an inflected language, energises the poetry.

Puns, acrostics, telestichs, homonyms, double entendres, tiny signal words; you name it. Wordplay is everywhere. Horace isn’t the only Roman poet to employ such tactics, of course, but he is upfront about it; ‘illudo chartis’ he says (‘I fool around on paper’). However, it is his disingenuity that shines through, and his candid confession makes the wordplay no easier to detect or unravel.

Horace loosens himself up to become poeta disiectus, a poet who can range across his lines of poetry connecting and disconnecting, revealing and hiding words at will. When, at 4.141-142, he writes ‘multa poetarum veniat manus, auxilio quae / sit mihi (nam multo plures sumus)’ (‘there is to hand a large number of poets—additional support for me—for it is we who are the clear majority’), doesn’t he momentarily suggest that his own (writing) hand, manus, can help him multiply his thoughts through the poetic weaving of words? manus is an underappreciated pun in the final lines of sermo 4.

Horace deliberately disconnects sermo 5 from sermones 1-4 with ‘egressum’, and unlatches sermo 10 from sermones 6-9 with ‘nempe’. On the face of it, the disconnections create a book of two halves. However, sermo 10 links with sermo 4 and sermo 6 links with sermo 1. In fact, throughout, sermones reference and reflect each other, setting up a tantalising web of associations. Whether all the associations we find were part of Horace’s conception, however, is not easily provable. Surely not all the interconnectivity and wordplay is there by design, but which acrostic, pun or dis/connection is deliberate? Already as I read through the pages of my book, I question whether I have over-, or under-, estimated Horace. No study of Horace leaves nothing up for debate.

By focussing on the verbal work that makes up Horace’s poetic mosaic/tapestry, time and space have dictated that my interpretation avoids too much discussion of biography, prosopography, or philosophy. In a further tightening of the content, I take Horace’s book as he presented it at the moment of publication—as his first and only published work, unaware of what his personal or literary future might hold—so that intertextual comment and comparison with ‘the later Horace’ is, in the main, not present. What such focus has achieved is to remind myself that, when we take just the briefest glimpse of the poet at work, we can quickly remind ourselves of ‘the achievement of, the mastery of, the thing’; of the sound of Horace’s words touching each other.

During his forty-year career as communications advisor to global companies, Andy Law was named an Ernst and Young Entrepreneur of the Year, was profiled by the Harvard Business Review, chaired plenary sessions at Davos, advised in Downing Street, and shared a podium with world leaders. He has written a number of highly acclaimed business books. His first, Open Minds, was a Daily Telegraph Business Book of the Year, and was described by Theodore Zeldin as “a 20th-century equivalent of John Foxe’s Book of Martyrs (1563), a business book which is literature.” After retirement, he renergised his love for the Classics.

A Translation and Interpretation of Horace’s Sermones, Book I is available now in Hardback. Enter the code PROMO25 at the checkout for a 25% discount.