A Study of Place in Short Fiction by James Joyce, William Faulkner and Sherwood Anderson 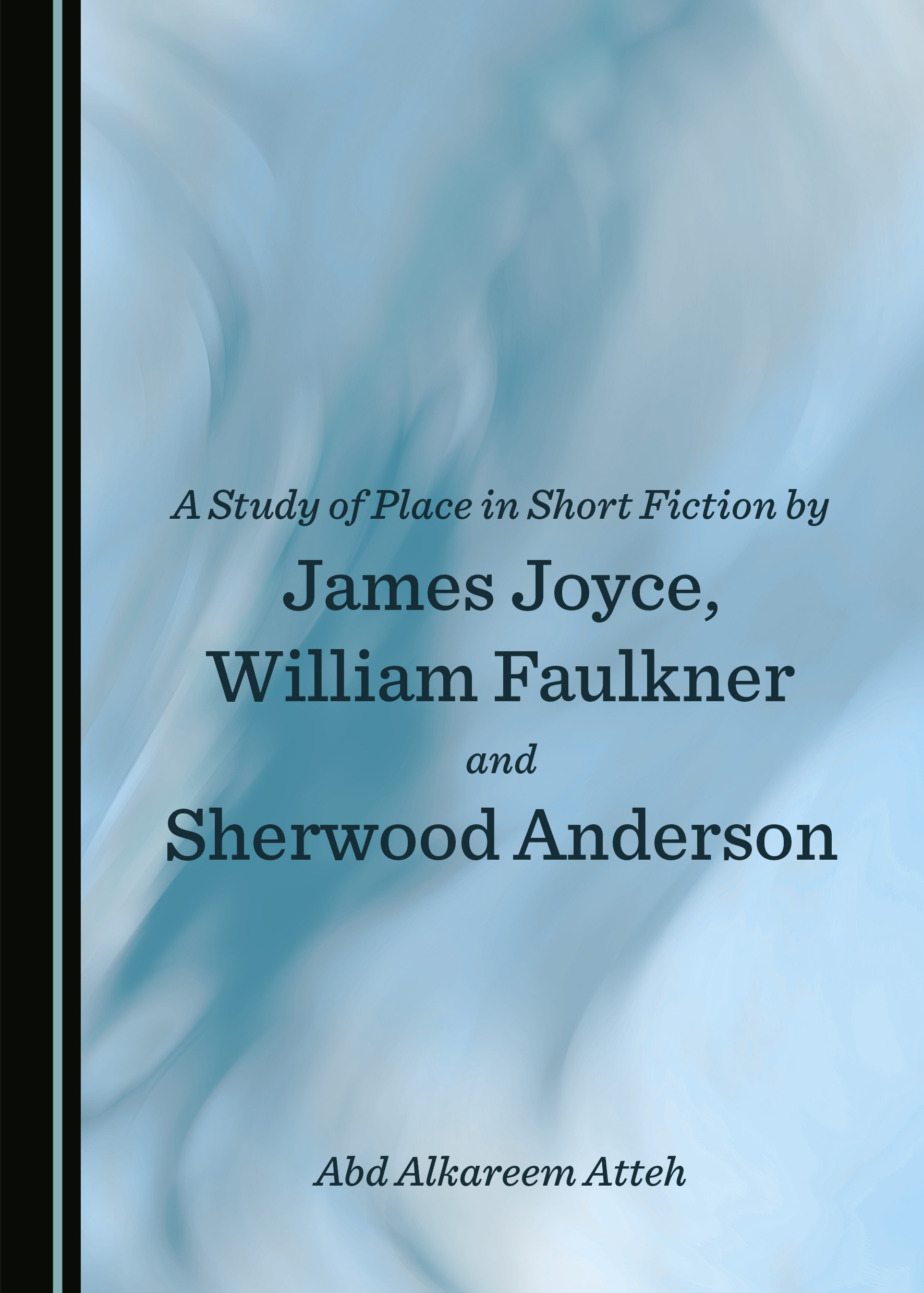 What inspired me in the first place to write a book about the topic of place is that I lived part of my life in a border area. Border areas make one aware of places and their characters, both in terms of landscape and culture. This experience magnifies one’s sense of place and allows one to observe how people go about life in different ways.

My interest in places led me to eventually write this book about the topic of place in three major modernist writers: William Faulkner, James Joyce, and Sherwood Anderson. These three writers spent their literary career writing about the places in which they were brought up and which they knew well.

These three writers used different literary genres to depict these places. However, as there is already a body of work on the topic of place in the novels of these writers, I chose to explore their less-researched short story cycles, and examine how that form offered a unique vehicle for the presentation of their aesthetics of place and space.

My book is a study of the poetics and politics of place in the short stories of James Joyce, Sherwood Anderson, and William Faulkner. Through an introduction, three chapters examining the short fiction of each writer, and a conclusion, this book explores various aspects of understanding and representing place. Focusing on these writers’ short story cycles and drawing on short story theories, I argue that the main characteristic of the modernist short story cycle is the creation of interiorly diversified chronotopes. My main argument is that these writers create uncertain fictional places that could be described as dialogic. This representation of place as heterogeneous, conflicting, and uncertain reflects the changed conception of, and attitude towards, place in modernism.

The introduction contextualizes the discussion and presents some relevant theoretical frameworks. New attitudes emerged towards the end of the 19th century and the start of the 20th century that changed people’s attitude towards the home-place. The three writers discussed here belong to the modernist era which witnessed radical social and historical changes that brought about a shift in the way humans viewed themselves and the world around them.

This spirit of change was strongly sensed and expressed in cultural texts in different fields of knowledge. Some proto-modernist and modernist thinkers and scientists forever redefined and reshaped our view of the world. Such figures include Karl Marx and his views on economy; Charles Darwin and his views on human evolution; Friedrich Nietzsche and his ideas on truth and language; Sigmund Freud and his investigation into human interiority; and, directly relevant for this book, Albert Einstein and his theory of relativity (around 1905), with which he challenged the traditional notions of space and place as fixed and absolute.

While this book is mainly led by the stories of these writers to get to conclusions, it draws from various theories on, and approaches to, place to support the arguments about place and space in these stories. Phenomenologists and humanistic geographers’ insights are useful for exploring the phenomenon of place and the way in which we perceive or experience it, and, more generally, the interaction between subjectivity and place.

The humanistic approach is principally informed and inspired by the philosophies of phenomenology and existentialism, particularly the philosophy of Martin Heidegger. Heidegger influentially shed light on the importance of the dwelling places in which people live. Essential to Heidegger’s reconceptualization of place were, however, his notions of “dasein” (dwelling) and “being” (as being in/at a place). For Heidegger, being and place are inextricably bound together and indeed inseparable; place is essential for the very idea of experience and consciousness. Our experience and our consciousness of the world in which we live are only possible through our existence in a place. In other words, consciousness is not possible without a place in which to live. Heidegger articulates this dynamic interaction as “situatedness”. To be “situated” means to be placed in relation to other things in that place; it is a temporal dwelling in a site. To be in a place thus is a “happening”. Therefore, to “be” is to exist within a structure of belonging that is already in a certain place. It is through “situatedness” or placedness that our existence has its origins and basis.

Another approach to the study of place is the materialist approach or critical human geography. The main assumption of this approach is that places are socially constructed. A seminal work that belongs to this approach is The Production of Space by the French philosopher Henry Lefebvre. Lefebvre suggests a hermeneutic triad through which we can approach space/place: “spatial practice”, “representations of space”, and “representational space”. “Spatial practices” are the “perceived” space of everyday ordinariness, “space” which structures lived reality; they includesroutes and networks, patterns and interactions that connect places and people, images with reality, work with leisure.

The permanent potential for change and creativity in place is most notably argued for by the French scholar Michel de Certeau. He writes about practice in relation to place and space. Through walking, argues de Certeau, we defy place and challenge it; we actively participate in modifying and rewriting of places and consequently make them our own. This book also draws from other approaches to place such as Yi-Fu Tuan and others.

The first chapter focuses on place in Joyce’s Dubliners (including the interior, the exterior, the public place of the street, and the space of home and country); it is argued that Joyce’s short story cycle generates a polyphonic world. Joyce’s use of the short story form and the short story cycle in particular is remarkably suitable to express the urban experience of Dublin. Joyce’s open-ended stories are like the city through which his characters walk endlessly and aimlessly only to end up where they started. His decision to network the stories in a short story cycle, made up of short narratives connected through shared themes and motifs, yet separate, was fortuitous.

This form allows the interaction between stories, and, as such, sheds light on the various spaces and aspects of Dublin, which, put together, create a kaleidoscopic chronotope, an image of a city that is both holistic and fragmentary. This fragmentary form constructs diverse and independent, yet related, narratives rather than one unified narrative and, by implication, one unified and stable place. In this sense at least, the collection could be properly labelled “polyphonic”, or interiorly dialogical in Bakhtinian terms. Such is the Joycean place itself: both real and imagined, interiorly diversified, yet homogenous in its paralysis plight.

In the second chapter, focusing on Anderson’s Winesburg, Ohio, I examine Anderson’s place, a small Midwestern town in Ohio, USA, and show how an image of heterotopic place is created out of the counterbalance between grand narratives of the pastoral Midwest and the fragmentary form of the short story cycle.

Anderson creates a cosmos that functions vertically rather than horizontally, discarding the traditional concept of time in relation to narrative as progressive and end-oriented so that the text’s focus is instead the spatial relation of various narratives. In this sense, the overall function of these stories creates a text composed of many separate narratives that are polyvocal and dialogic in nature. The episodic nature of the collection defies complete narratives. The short story cycle functions not through the progression of time, but through the accumulation of experience gained from the repetition of themes and motifs which, in turn, guide the reader.

This chapter examines place as imagined, lived, and experienced, and studies specific chronotopes such as that of the farm and the small town as experienced by characters, as well as the sense of alienation that pervades both experiences and imaginings of place. In his work, Anderson counterbalances the narrative of the pastoral myth with the fragmentary narrative form of the short story cycle. The form, as I have argued, expresses Anderson’s scepticism towards some of the discourses or grand narratives of his region. The short story form itself serves Anderson well in expressing the isolation of his many characters. The relationships of characters to each other resemble the short story cycle in that individual stories are disconnected and connected at the same time.

The third chapter deals with William Faulkner’s fictional place, his imaginary county of Yoknapatawpha, and argues that Faulkner’s place is heteroglossic. Collected Stories of William Faulkner, which the author compiled himself and arranged in a certain way, is a microcosm in itself. The way in which these stories are arranged into sections puts the various and diverse elements of Yonapatawpha face to face with each other.

The main argument here is that Yoknapatawpha is made up of imagined communities. The chapter focuses on language and its role in constructing place and forming a sense of place. Faulkner’s fictional county is a heteroglossic place made up of diverse forces and discourses that exist side by side. His texts allow an interaction between the reader and the text, an act that results in readers being active in creating and recreating the meaning of these texts and places. The reader has to constantly modify and establish a dialogue between the various voices and narratives presented within the space of one story or even, by implication, one collection of stories. Through the interaction between readers and texts, these diegetic places come alive—and the worlds of the producer of the text and the reader are transformed too.

The conclusion summarizes the findings in a comparative fashion, arguing that the meaning of place is not fixed and stable, but rather personal and momentary reflected in the writerly texts. It argues that the narratives these writers develop allocate an important role to the reader: to co-construct the text and its image of place.

Abd Alkareem Atteh received a PhD from the University of Essex, UK, on the subjects of modernism, place and the short story cycle. His work focuses on place, modernist fiction, American literature, Irish literature, and creative writing.

A Study of Place in Short Fiction by James Joyce, William Faulkner and Sherwood Anderson is available now in Hardback at a 25% discount. Enter PROMO25 at the checkout to redeem.