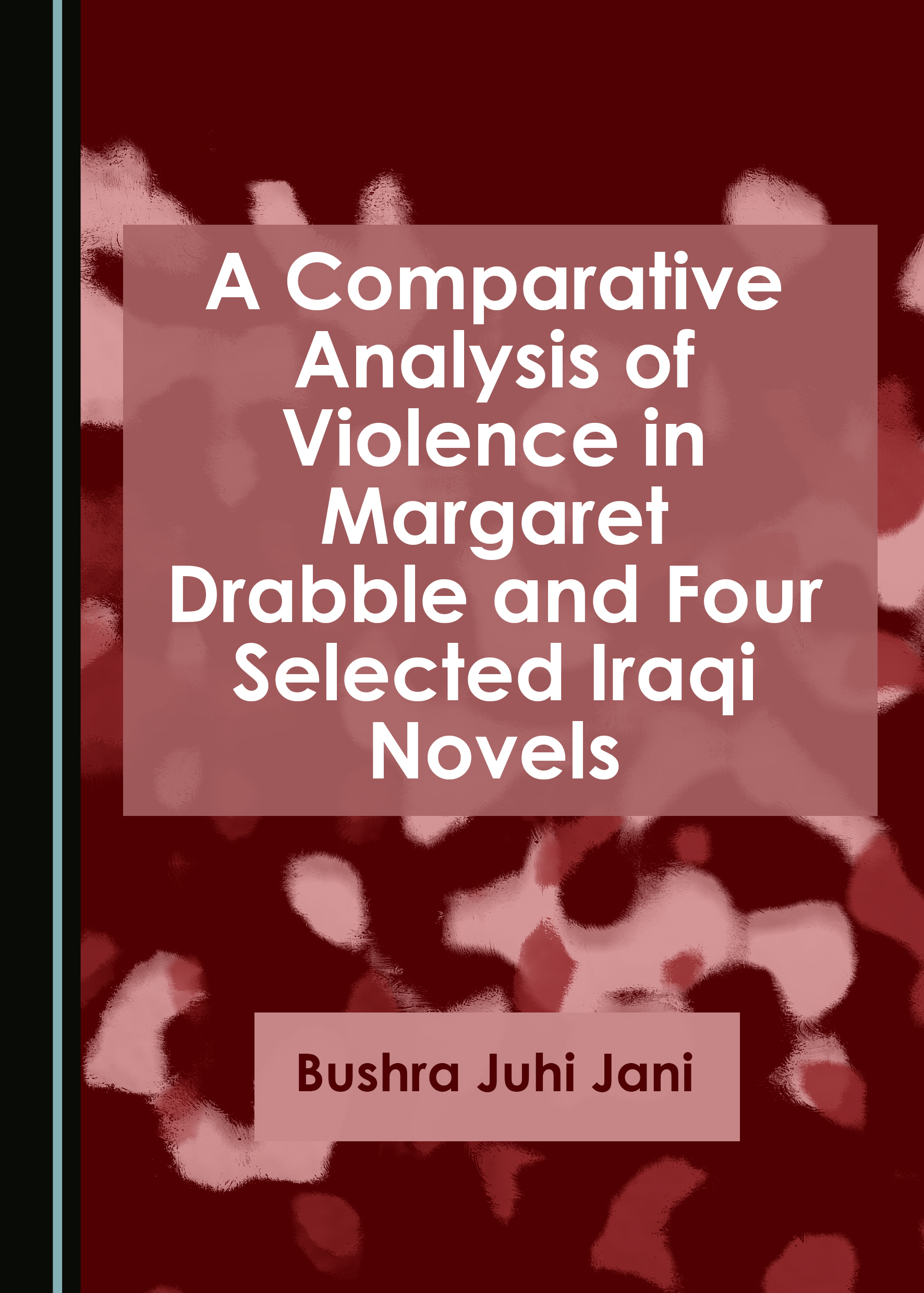 This book presents a comparative study of four novels by the English author Margaret Drabble and four novels by Iraqi authors published in the period 2008-2013. It compares The Radiant Way (1987/2014) with Ma ba‘d al-hubb/Beyond Love by Hadiya Husayn (2012); The Gates of Ivory (1991/2014) with Frankenstein in Baghdad (2013) by Ahmad Sa‘dawi; The Red Queen (2004) with Lutfiya aI-Dulaymi’s Sayyidat zuhal (2012); and The Pure Gold Baby (2013) with Aliya Mamduh’s al-Mahbubat/The Loved Ones (2008). In each chapter, one novel of Margaret Drabble is juxtaposed with the work of one of her Iraqi counterparts. All the chapters in the book have a thematic focus and a separate theoretical framework consisting of major works relating to the main theme. Several sub-themes recur through the various chapters.

The premise of this book—to compare representations of violence in relation to gender in the work of a popular British writer and in contemporary Iraqi fiction—is an unusual one. I undertake a challenging project in comparative literature that frequently reveals subtle and surprising commonalities between these very different contexts, and demonstrate incisively how both Drabble and the selected Iraqi writers undercut or subvert norms and ideals of gender through their concern with both ‘soft’ and ‘hard’ violence. The analysis in my book makes effective use of theoretical approaches including Foucault, Marx, Freud, Bourdieu, and feminist theory. The rationale for placing Drabble as a lone female British writer in comparison to a diverse collection of Iraqi writers is fully justified. The book is concerned with the depiction of gendered violence across a diverse range of forms. It might be suggested that the choice not to include other British writers (such as Doris Lessing or Penelope Lively, for example) when four Iraqi writers are included makes the book seem rather to recapitulate the structures of Western cultural dominance; however, I see that the strength and variety of my analytical engagements with the Iraqi texts mitigate against this.

The Introduction sets the scene for Drabble as a writer who, to some extent, takes the temperature of contemporary Britain, particularly in the 1980s when the legacies of first-wave feminism played out against a backdrop of Thatcherite individualism. I consider economic and political pressures as having an influence on the gains made by women in terms of education and equal opportunities, and link the sexualisation of popular culture to globalisation. Subsequently, the discussion turns to the Iraqi novels and their Western cultural influences, and considers how important cultural exchange is in resisting the kinds of aggressive interventionist policies used by Britain and America during this period and later.

The account of recent political upheaval in Iraq and the repressive measures and violence against women frames the Iraqi texts as ground-breaking in terms of their resistant possibilities and as experiments in defining gendered responses to contemporary ‘ripples of violence’; a chilling phrase that highlights my argument that violence is complex and enmeshed within groups and institutions.

This book explores different types of violence, including physical (hard) violence, or what Newton Garver terms ‘overt’ violence, and non-physical (soft) or ‘covert or quiet’ violence. It is divided into four chapters in which different aspects of violence are located somewhere on a spectrum between hard and soft violence. Given that this book consistently critiques binary thinking as patriarchal and Western colonialist, it tries to avoid reproducing an unintentional binary (soft/hard violence) by viewing it as a spectrum, and advocates adopting the ‘continuum’ or ‘spectrum’ concept for hard and soft violence. All the chapters show this relationship, just from a different perspective: the first three from a primarily ‘hard’ violence viewpoint, the last from a ‘soft’ one. In this context, it is worth mentioning that overt violence has been perpetrated on a vast scale in Iraq in recent decades and in Europe during the first half of the twentieth century, whereas covert violence is present in some form in all modern societies. Drabble and the four Iraqi authors are in an especially good position to appreciate the relationship between overt and covert violence.

Chapter One compares violence, gender and class in Drabble’s The Radiant Way and Hadiya Husayn’s Beyond Love. The discussion tracks female relationships over time, and uses feminist theory in combination with Foucauldian and Marxist insights that illuminate how ‘global structures of control’ impact upon female experience and its representation both in the privileged context of the West and the precarious one of sectarian violence and neo-imperial control in Iraq. The most persuasive parts of the argument hinge upon the parallel drawn between the sanctions against Iraq and strikes and riots in the UK as forms of ‘biopower’, which extends into a comparison of Drabble’s use of an ‘allusive irony’ that often animates the perspectives of her female protagonists with Husayn’s documentation of trauma and the blaming of victims through a ‘tragic and dark’ confessional voice. The chapter concludes by advocating that these texts allow readers to ‘work through’ unresolved issues that indicate the complexities of global vectors of power.

Chapter Two addresses the grotesque and the abject in Drabble’s Gates of Ivory and Ahmed Sa‘dawi’s Frankenstein in Baghdad. I use the Bakhtinian understanding of the carnivalesque as producing ‘subversive’ literature that troubles gender distinctions via the monstrous, the animal, and the abject body. I used effective analysis of menstruation as linked to death and of the ghostliness of the mother as compared to the grotesque pregnant hag. Another example of my use of effective analysis is the opposition between the monster as a metaphor for the disintegration of Iraqi society into violence and the monster as a fearful but fascinating figure for Drabble’s characters to seek out, which works well, particularly in the context of human-animal hybrids and baldness as a vulnerability that ‘implies hope’ and new birth. I make a striking contrast between Drabble’s onlookers and Sa‘dawi’s participants in violence, suggesting that the abject and the grotesque are a vital part of the female narratives that the next chapter turns to, as well as an important consideration for comparative literary projects with a focus on global or postcolonial inequalities.

Chapter Three focuses on stories as the form of life itself and compares Drabble’s The Red Queen with Lutfiya al-Dulaimi’s Saturn Ladies. The analysis makes use of Freud’s notion of a movement towards death, as well as Derrida’s formulation of literature as testimony. The analysis of the macabre violence in many of the stories in both texts incorporates Elaine Scarry’s theorisation of pain, and asks key questions both about the importance of paratexts and autobiography. I treat the texts as historical metafiction and raise questions that provoke new insights into the topics of the previous chapters, particularly in relation to the importance of collective narratives as ‘self-extension’ and the voicing of the unspeakable as a form of ‘redemption’ which the storyteller facilitates.

The final chapter extends these insights to consider the role of female community and the way in which narratives of ‘symbolic violence’, in Pierre Bourdieu’s terms, are built on an ‘autobiographical base’ in Drabble’s Pure Gold Baby and Aliya Mamdouh’s The Loved Ones. The chapter mounts a feminist critique of Bourdieu, whilst nevertheless validating his insights into the operation of power and privilege, and brings in Slavoj Žižek to discuss the violence of language. Cultural capital mixed with ‘male sexual magic’ is explored as being a powerful combination, but one that can be resisted and survived in Drabble’s novel through the actions and artistic creation of female communities. The complexities of colonialism are explored with reference to Conrad’s Heart of Darkness and Frantz Fanon’s understanding of the necessity of violent resistance. In Mamdouh’s novel, this is explicitly dealt with in relation to commodification and the exploitation of natural resources and populations, whereas I note that it is only implicitly addressed by Drabble via her female anthropologist heroine. I conclude with the notion that both texts suggest that women have the power both to survive and actively rehabilitate through material and narrative collaboration and support.

In the conclusion of the book, I summarise the considerable journeys—psychological, physical and formal—that these texts take their readers and characters on. I suggest that multiple forms of resistance are possible despite female characters and readers being ‘entrapped’ by both hard and soft violence, as well as the threat and after-effects of both forms of gendered oppression. I argue that the complexity of these metafictional and often experimental narratives defies ‘the imprint of theories’ and points towards further avenues for analysis in relation to Daesh whose campaign of terror makes use of gendered violence.

Overall, the analysis in my book is detailed, deliberate, and cohesive, focusing on the narrative strategies used by women writers to address the violence produced by structural inequalities. The argument often moves elegantly between theoretical frameworks, and this approach is effective in demonstrating the complexity of the texts at hand. Finally, my book can be seen as an intervention in the fields of comparative literature and feminist literary studies.

Bushra Juhi Jani is a Lecturer of English at Al-Nahrain University, Iraq. She received her PhD in English Literature from the University of Sheffield, UK, in 2018. She has published a number of research papers on Margaret Drabble and contemporary Iraqi novels, and her research interests lie in the areas of English and Iraqi novels, movie studies, creative writing and translation. She co-authored the translation of an anthology of Iraqi short stories, which brought together ten Iraqi storytellers (2019).

A Comparative Analysis of Violence in Margaret Drabble and Four Selected Iraqi Novels is available now in Hardback at a 25% discount. Enter code PROMO25 to redeem.