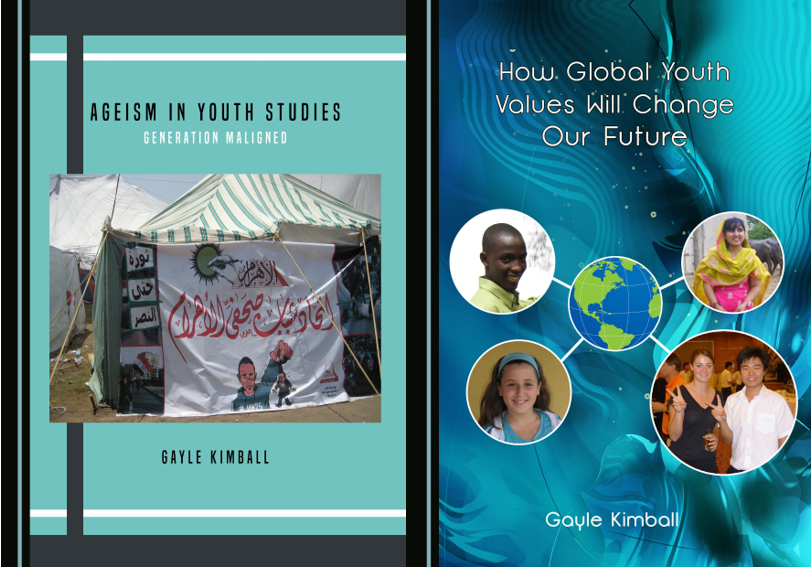 For this edition of Book in Focus we have a double-header from Gayle Kimball, whose work explores groups under-represented in research, most notably global youth, as demonstrated in her two publications with CSP, Ageism in Youth Studies (2017) and How Global Youth Values Will Change Our Future (2018). Here Dr Kimball reflects on some emerging trends in global youth culture, including the increasing prevalence of youth activist movements.

What Are Young People Thinking?

By Gayle Kimball, author of Ageism in Youth Studies: Generation Maligned and How Global Youth Values Will Change Our Future

Since I was a child, I have cared about the underdog, the voiceless. Although I’ve written over 22 books on seemingly disparate topics, the recurring theme is that they give voice to the under-represented: women and girls, egalitarian couples, and youth. My recent books have a global focus, rather than limiting their attention to North America. To find out what global young people are thinking and what they value, I surveyed over 4,000 youth, mainly under the age of 19, from 18 countries, and quote them in my books.

“The new voices need to be heard and this book can let the world hear them! I am so amazed that there is really a new force waking up around the world, which can make the Earth a better place. If I were a leader, I would make it part of the education. The world needs to know how the new generation thinks and what differences they can make.”

“I’d like adults to understand that in the 21st century, young people are thinking big and have a huge amount of knowledge that can be useful, due in large part to the Internet and the globalization it has brought about. I also would like them to think outside the box a little more, as so many (including my parents) think that school-uni-job is the only way to go.”

“We’re the Green Generation. Let’s unite to bring an end to famine and poverty, stop pollution and epidemics, and make our environment clean and green with happy faces in it.”

To find these young people, starting in Japan in 2004, I traveled to Africa, Asia, Europe, the Middle East, South America, and various US states. I visited schools and families to learn how the new generation’s values and beliefs will shape our global future. I stayed with families in Brazil, China, Cuba, Egypt, England, Greece, India, Indonesia, Japan, South Korea, Mexico, Switzerland, Tanzania and Turkey. Any time I met people from another country, I asked them if they knew youth or their teachers in their country of origin, such as when I met a Dutch teacher in Bonaire or a German student in Luxor, Egypt. Over 80 teachers listed in the acknowledgements on the Global Youth Book webpage mailed or emailed their students’ responses to the 12 book questions.

Traveling around the world, I got to experience drinking yak butter tea in Tibet, eating 100 different kinds of dumplings in China, steamed caterpillar in Korea, many varieties of lentils and flatbread in India, alligator in Louisiana, jelly-like green vegetables in Egypt, and excellent Russian ice cream from a street vendor. I was stranded in airports in Cairo and Dar es-Salaam when hosts didn’t pick me up, which is another story. The best part of globetrotting was talking with young people in places as varied as barren blocks of apartments in Cairo, tiny apartments in China, a colorfully painted home in Brazil, and two-story homes in London and Northern India (see photos on Facebook), as well as email and Skype dialogues. Photographs of some of the respondents are included in the Facebook Global Youth SpeakOut albums and some videotaped interviews are on the YouTube “TheGlobalyouth” channel.

An ah-ha moment for me was that realization that ageism is at play in academic circles. Most academics erroneously told me that many books were written about youth activism and cited books that didn’t focus on youth at all, indicating that a blind spot or bias was at play. Some publishers told me that readers aren’t interested in youth. This phenomenon is similar to the sexism that kept scholars of both sexes from focusing on women’s contributions, until feminists pointed it out in the Second Wave of the woman’s movement. For example, I wrote my dissertation on the religious ideas of the 19th century novelist Harriet Beecher Stowe. Her novels clearly focus on the saving grace of virtuous women, but no one had discussed the very obvious theme due to the sexist blind spot. Even books describing bias against young people don’t include their actual voices, just like history books included few women’s or people of color’s voices. The focus on great men is corrected by doing “history from below” and “standpoint” theory approaches to research by including the thoughts of actual participants—in this case, youth.

After reading over 4,000 responses to my open-ended questions for young people from 88 countries, I’m most concerned about the gap between the 1% and the 99% of the population. I have ongoing email communications with some of the most motivated respondents that have lasted for years, such as a Chinese student I “met” when he was a first-year college student. I traveled to speak with some youth in person and Skyped with others.

The most troubling fact is that around 85% of the world’s young people are growing up in developing nations in a world undergoing harmful climate change. The talent and energy of too many of them are diminished by lack of food, health care and education, robbing us of their potential contributions to progress. Young people in developing countries will change the global future with their aspirations for middle-class opportunities. The fact that 26 men own as much wealth as half the world’s population, according to Oxfam, indicates that growing inequality is going to cause more uprisings like the ones that started with the Arab Spring in 2011 and spread to occupy other public spaces around the world.

Some malnourished children are literally stunted in their growth and mental capacities for the rest of their lives. In the Global South, kids suffer from malnutrition in areas like India and Sub-Saharan Africa and work hard in their parents’ fields, often depriving them of education. In contrast, in the developed world, youth struggle with obesity, eat too much unhealthy junk food and do not exercise enough, often sitting in front of screens instead. It’s simply not humane to allow fellow humans to suffer while pampered pets in the developed world get better food and health care. People in the US spend $100 billion a year on their pets.

The biggest surprise to me after ten years of dialogue with youth is illustrated in the photo of Joao in Brazil in Chapter 1 of Youth Values. With his “Lost” T-shirt, headphones, skateboard and athletic shoes he could be an urban, middle-class teen in any country. I discovered that regional differences are less important than education and class in shaping youth attitudes. Middle-class young people share a global culture made possible by ICT and their education.

The difference in youth culture is split between the urban/rural dichotomy. Village youth live traditionally in a small world without knowledge of global issues like climate change and with little individual autonomy to make major life decisions such as choice of marriage partner. Urbanization is increasing, however, and cell phones with Internet connections are percolating into villages, so the world is gradually becoming more connected. As an educator, I was saddened to learn that, in developing nations, classes are very large and not well-supplied, keeping youth poorly educated.

Youth are more egalitarian than their elders and are less likely to judge people by their ethnicity, sexual preference or gender. More young women graduate with university degrees than men, meaning that more women will move into leadership positions. Studies generally agree that women politicians take more action to actually help families and girls are more egalitarian than boys.

The Arab Spring, the global Occupy Movements, and the recent climate movement led by Swedish teen Greta Thunberg led by youth show us their resistance to hierarchies and fixed positions, valuing freedom of expression, direct democracy and consensus decision-making. They’re also down to earth, and interested in cooperative gardening to produce healthy food. They value relationships more than material success, placing priority on a lasting marriage and being good parents. The generation gap is smaller than it was with Baby Boomers and their parents. They feel close to their parents and they are willing to work cooperatively with various age groups, enhanced by their open-mindedness and acceptance of diversity.

The logical progression to describing youth activism in the two-volume Brave: Young Women’s Global Revolution was my latest book Climate Girls Saving Our World. T-shirts proclaim, “Girl Power,” “Who runs the world? Girls.” A poster held by a girl in the “Women in White” Belarus demonstrations against President Alexander Lukashenko read “#Fight like a Belarusian Girl.” Young Egyptian and Iranian women are using social media to protest violence against women, inspired by the global #MeToo movement.

Girls lead the current climate movement, making up the large majority of the activists in every youth-led climate group I’ve discovered. The 54 activists I interviewed, from 31 countries, explain that they are caring, have more affinity with nature, and are less afraid of peer pressure than teenage boys. Many think of themselves as different from the norm, so they have less to lose than popular students by standing out. They stand on the legacy of the global women’s movement, with all but two strongly identifying as feminists and many rejecting the concept of binary gender. Determined not to give up hope, they predict that they will succeed as change-makers. My next book is about recent global youth-led democracy movements.

Gayle Kimball, PhD, is the author of a dozen books, many of which explore groups under-represented in research, such as youth. Professor Emerita at California State University, she has travelled around the world to interview young people for her trilogy about global youth activism, young women’s issues, and how global youth viewpoints will change our future. 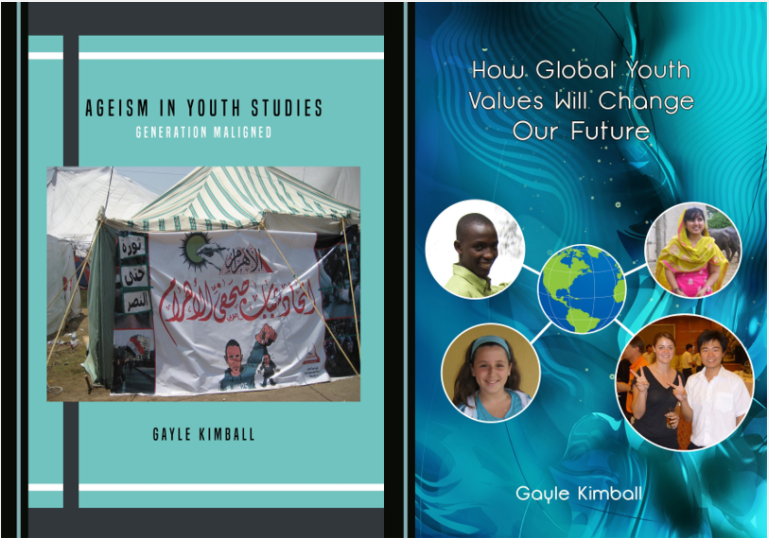 Ageism in Youth Studies: Generation Maligned and How Global Youth Values Will Change Our Future are available now. Enter the code PROMO25 at the checkout for a 25% discount.