3D Management, an Integral Theory for Organisations in the Vanguard of Evolution 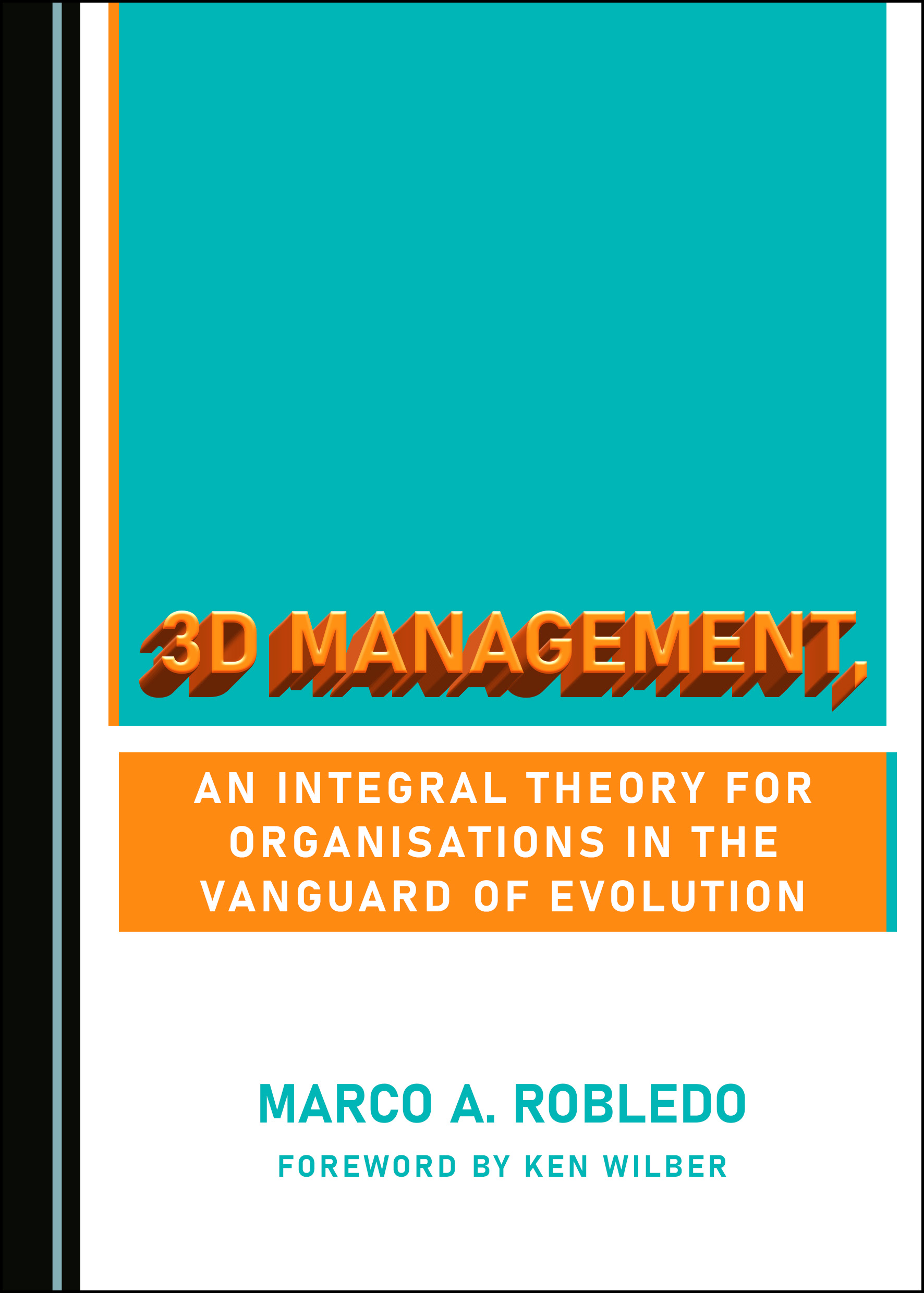 By Marco A. Robledo

In times of change, like the one we are currently living in, it is critical to challenge the beliefs that shape our conduct. In this edition of Book in Focus, Marco A. Robledo introduces and discusses his theory of 3D management in the context of a post-COVID-19 world. A pioneering application of Ken Wilber’s groundbreaking Integral Theory to business and organisations, the theory challenges traditional paradigms in a radical evolution of conventional management, doing away with its pathologies, deformations, and limitations while preserving its achievement and benefits.

When Cambridge Scholars Publishing kindly invited me to share some thoughts on my book, 3D Management, an Integral Theory for Organisations in the Vanguard of Evolution, for this author-penned blog series I couldn’t say no. However, I have built a reputation of being a man with the gift of never doing exactly what he is told, so I decided to write something halfway between an article and an addendum.

The reason for is that, when I finished writing the manuscript, the global pandemic we are currently facing had not even started. During the final proofreading stage, I was in the middle of the lockdown and I decided to sneak in, here and there, a few comments about the predicament we were facing. However, I feel it was not enough and, for this reason, I think it is worth starting this article with the following question: How is my book relevant to a post-COVID society?

Take a look at the world right now. This is not how things were supposed to be. Don’t you have the feeling of being in a dystopian science fiction movie, or that we are all in a Petri dish subjected to inscrutable experiments performed by a higher intelligence? Certainly, what follows will be a delicate period, and I believe the book offers some important guidelines to help individuals and organisations navigate this liquid modernity. COVID-19 has shown us how unpredictable, complex, and deeply interconnected is the world in which we live. We live in a VUCA (volatility, uncertainty, complexity and ambiguity) world and coronavirus has triggered the mother of all VUCA situations. COVID-19 is likely to be followed by other plagues, particularly in the economic and environmental spheres.

We can build a different future than the tomorrow we see on the horizon, but we need to radically reimagine the ways in which our organisations and institutions are conceived and managed. The traditional management model has become too incompetent and incomplete to deal with an unforgiving environment, social dissatisfaction, and employee disengagement, and that is making organisations increasingly dysfunctional.

The best vaccine I know of against all these ills is Integral Theory, the world’s first truly comprehensive philosophy. This metatheory, masterminded by Ken Wilber as early as 1995, has become a school of thought of increasing influence that spans across all disciplines. Only an integral perspective can appropriately address the complexity of the future. Global wicked problems and black swans of the scale that we currently face require an integral vision that replaces the current fractured worldview. Integral Theory tools bring simplicity to such complexity, granting clarity and comprehensiveness to the analysis of any situation or problem.

Initially presented in 2004 in a book written in Spanish, I proposed 3D Management as the first integrally-built management theory. Ken Wilber himself, the creator of Integral Theory, considered as one of the most important philosophers of our time and the Einstein of consciousness, has given me the honour of endorsing my work with a wonderful prologue that alone justifies the purchase of the book.

As I said, one of the singularities of 3D Management is being integrally-built using rigorous leading-edge tools such as metatriangulation and AQAL. Being integral means that it analyses organisational reality from as many perspectives, methodologies, types, lines, states, and stages as possible. As such, it is a metatheory that integrates all previous organisational knowledge in an integral, balanced, and non-marginalising framework. This makes 3D Management much more than a new theory. It is a new epistemology, and does something that no other management theory has done before. Rather than competing with other theories, 3D Management acts as a non-prescriptive and unifying framework that includes as many legitimate perspectives, theories, and methodologies as possible.

Even more important than this epistemological contribution, is the book’s ontological one. This disruptive theory denies the imperialism of the bottom line, and replaces it with a harmonic triumvirate that takes profit, people, planet, and purpose into account equally. As I say in the book (p. 328):

“3D Management reboots management with a fundamentally different ontology that overcomes the flatland one-dimensionality of the traditional paradigm where only profits matter. Instead, it proposes a balanced triad of science, arts, and ethics, three equally important, independent, and interrelated dimensions that finally converge into a fourth spiritual dimension. Thus, 3D Management is a summum bonum of science, arts, ethics, and spirit, four key dimensions to achieve sustainable excellence, bring prosperity to everyone they touch, unfold organisational and individual potential, rediscover personal satisfaction at work, raise consciousness, and reinvent corporate spirit. As a model, 3D Management not only gives its rightful place to each of its constituent dimensions, it also reinvents them. The scientific dimension is redefined by replacing the old authoritarian regime with a holarchical governance system based on responsible autonomy. The artistic dimension breaks the organisation’s boundaries to merge it with an ecosystem of stakeholders, all equally important and valued, and creates the appropriate mechanisms to spur the horizontal and vertical development of them all. Finally, the ethical dimension gets promoted for the first time to its rightful place, no longer subordinated to economic results, and geared by kosmocentric values.”

Business and organisations can be a primary vehicle for transforming society, building a better world, and providing spaces for people to reach their full potential and become something greater than what they were. That is the vision of 3D Management and other leading-edge contributions such as Reinventing Organizations, Holacracy, Sociocracy, Beyond Budgeting, and Conscious Capitalism. They are not far-fetched, utopian visions, but are, rather, the manifestations of organisational evolution, and many organisations are paving the way in that direction. The book features case studies of more than 60 vanguard organisations that are showing that this new paradigm works anywhere, regardless of country, sector, or size. I handpicked the organisations portrayed in the book to show not only the famous examples everyone is talking about (Zappos, Buurtzorg, Morning Star, W.L. Gore, etc.), but also others not so well-known because they don’t come from Anglo-Saxon countries, but equally impressive and important, such as Ner Group and Cineciutat (both from Spain), Pressto Peru, Ouishare (originally from France), and Knowmad Business School (Holland).

Integral, humanistic, evolutionary, and socially responsible: that’s 3D Management. If the purpose of a theory is progress toward greater truth, then I suggest that a metatheory that holds as many legitimate perspectives as possible within its frame rings truer than any other.

Dr Marco A. Robledo is a Professor of Management and the Director of the Master of Business Administration at the University of the Balearic Islands, Spain. An important part of his research is focused on new management paradigms, and, for years, he has been studying and working with organisations that are more conscious, humane, and socially responsible.

3D Management, an Integral Theory for Organisations in the Vanguard of Evolution is available now in Hardback and Paperback. Enter the code PROMO25 at the checkout for a 25% discount. Click here to access a free 30-page sample.